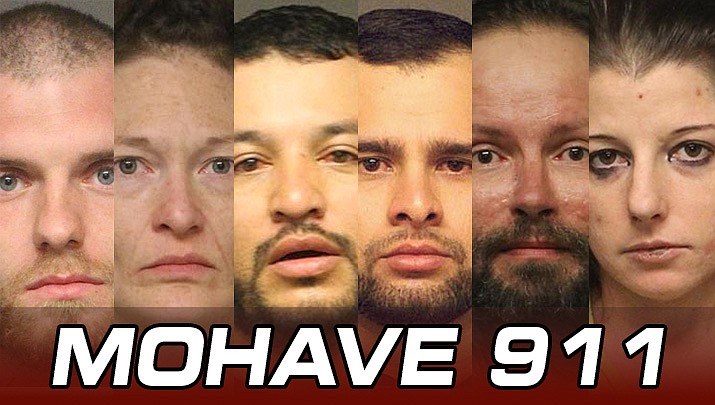 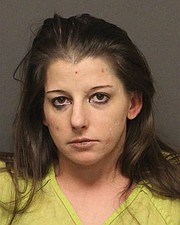 Amber Lynn Springman, 31, of Lake Havasu City, was charged by the Mohave County Sheriff’s Office with one felony count of destruction of jail property following an alleged incident that occurred Sunday, Feb. 2.

At approximately 6:15 p.m., deputies responded to the Mohave County Adult Detention Facility in reference to a call of destruction of property. Deputies made contact with the on-duty corporal, who advised Springman was currently housed in a holding cell and had thrown her food tray, which struck the window of her cell causing it to break. Damage to the window was estimated at $800.

When asked, Springman reportedly advised she had thrown her tray at the door, not the window, and that the window must have been broken before she was housed. 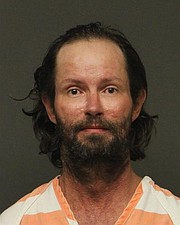 At approximately 11:45 p.m., deputies were advised of a gold pickup truck involved in a hit-and-run incident that had sustained front-end damage. A few minutes later, deputies reportedly observed a pickup truck matching the description run a stop sign at Richard Street and Taylor Avenue and take off at a high rate of speed.

Deputies conducted a traffic stop and the driver exited the truck shortly after stopping. Deputies ordered the driver back into the vehicle and approached the driver, identified as Darger. When deputies requested Darger’s identification, he reportedly fumbled through his wallet for several minutes before handing deputies a bank card.

Deputies report observing an open case of beer on the passenger seat. They obtained Darger’s identification and a records check revealed his license was suspended for previous alcohol-related offenses. Field sobriety tests were conducted, Darger was detained and a breath test was conducted, allegedly resulting in a .224% BAC.

Deputies were also contacted by a witness who stated she had observed Darger’s vehicle strike a block wall in the 200 block of Taylor Avenue, then flee the scene.

Darger was arrested on suspicion of felony aggravated DUI, and three counts of misdemeanor DUI, driving with a suspended/revoked license, reckless driving, and hit-and-run damage, all misdemeanors.

He was transported to Washington County Detention Center in Utah.

Additional charges may be filed as this investigation continues.

Two Kingman men were arrested by the Mohave County Sheriff’s Office after one allegedly pointed a gun at another motorist and demanded his ID while at a stop sign.

At approximately 1 a.m., deputies were dispatched to a business in the 2800 block of Northern Avenue in reference to a weapons offense. Deputies arrived on scene and met with the victim who advised he had been driving his car in the area of Melody Street and Butler Avenue when a metallic-colored sedan pulled up next to him at a stop sign.

The victim alleged that the passenger of the vehicle, a Hispanic male wearing a black shirt and black hat, demanded his ID and pointed a gun at him. The victim then placed the car in reverse and was able to drive away. The sedan began following the victim’s vehicle, and reportedly placed a white strobe light in the windshield, attempting to appear as an officer conducting a traffic stop. The victim continued on without stopping, eventually getting to the business to call law enforcement and the pursuing vehicle fled the scene.

While on scene conducting their investigation, deputies observed a vehicle that matched the description of the suspect’s vehicle drive by the scene. Deputies began following the vehicle and attempted to conduct a traffic stop, when the reportedly vehicle took off at a high rate of speed. The vehicle eventually came to a stop in the 2700 block of Leroy Avenue.

Deputies made contact with the driver, identified as 27-year-old Oscar Valdimir Quijano-Monge of Kingman, and the passenger, identified as 30-year-old Carlos Rutilio Ochoa Quinones of Kingman. Deputies report observing an open beer bottle in the vehicle and detecting the odor of alcohol coming from inside. Deputies removed the driver from the vehicle and observed a folded dollar bill with a crystalline substance left behind on the driver’s seat.

Quijano-Monge was patted down and deputies say they located a machete-type knife in his right pant leg. Deputies then made contact with the passenger, Quinones, who matched the physical description given by the victim. Quinones was removed from the vehicle and deputies reportedly located a black handgun tucked between the passenger seat and center console.

Oscar Valdimir Quijano-Monge was arrested on suspicion of dangerous drug possession, drug paraphernalia possession, carrying a weapon in commission of a felony, all felonies, and an active arrest warrant. Carlos Rutilio Ochoa Quinones was arrested on suspicion of aggravated assault with a deadly weapon, failure to admit to carrying a deadly weapon, dangerous drug Possession, and drug paraphernalia possession, all felonies. Both were transported to the Mohave County Adult Detention Facility.

At approximately 11 a.m., deputies observed a sedan with a Colorado license plate and a cracked windshield at Stockton Hill Road and Sycamore Avenue. A records check was conducted on the license plate, and results reportedly showed the car had been stolen in a carjacking incident.

Deputies observed two occupants in the vehicle – a male with short hair, and a female with pulled back hair. When the vehicle pulled into the parking lot of a business in the 1700 block of Beverly Avenue, deputies attempted to conduct a traffic stop and the vehicle reportedly took off at a high rate of speed.

A pursuit ensued and the vehicle ran several stop signs. Deputies lost sight of the vehicle, but located it abandoned in the 3900 block of Raymond Avenue.

Kingman police set up a perimeter and both suspects were located shortly in the parking lot of a nearby business.

Jesse McQuade Dawson, the driver of the vehicle, was arrested on suspicion of theft of means of transportation, unlawful flight from law enforcement, both felonies, and misdemeanor resisting arrest. Stephanie Lynn Sparks was arrested on suspicion of felony theft of means of transportation and misdemeanor resisting arrest. Both were transported to the Mohave County Adult Detention Facility.