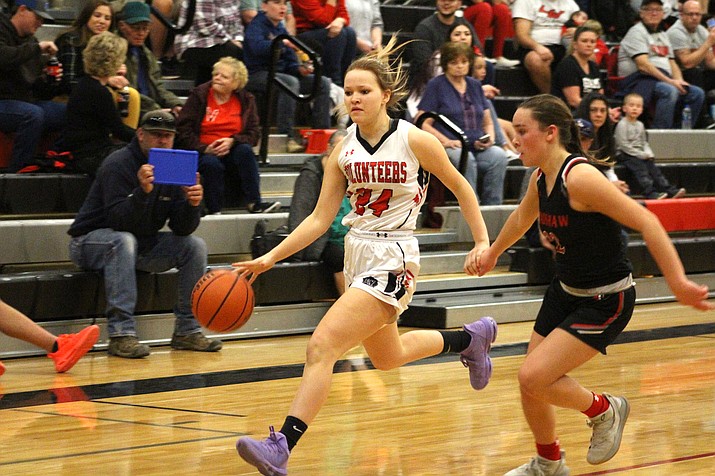 “I am really impressed how the girls continue to play hard and close out their season in a positive manner,” said Lady Vols head coach Jerry Arave. “We’ve really played at a high intensity level and it has paid off in the last three games. Hopefully we will move up in the rankings and have a shot at a spot in the play-in game for state. But if not, the girls have had a solid season and they should be proud of themselves.”

Lee Williams entered Friday at No. 28 in the 4A Conference rankings, with the top 24 squads earning a bid to the state tournament. The Lady Vols could move up when updated rankings are released at noon Tuesday, but there are no guarantees.

Nevertheless, Lee Williams helped itself by starting off strong on the road against the Lady T-birds. Savannah Jimenez led the charge with five points in the first quarter, while Lia Lucero and Liberty Cronk each connected on a deep 3-pointer to give the Lady Vols an 11-4 advantage.

“It was very important to us to have a strong start,” Arave said. “And for us, it all starts with defense. We apply pressure, force turnovers, and take advantage.”

“Kate and Alexis really got after it, especially on the defensive end, and Amya scored on two offensive rebounds to help us build a nice lead,” Arave said. “In addition, Liberty Cronk was outstanding on the offensive end scoring eight of her team-high 15 points and giving the Lady Vols the momentum heading into the third quarter.”

And Lee Williams’ defense kept that momentum as it held Mohave to just five points in the third to clinch the victory.

At Mohave, the Vols took care of business on the road Friday in a 60-45 win over the T-birds.

The Vols led 33-30 at halftime, but pulled away in the fourth quarter by outscoring Mohave 16-9.

No. 22 ranked Lee Williams (10-7, 7-4) hosts 45th-ranked Mingus at 7 p.m. Tuesday on Senior Night, which is also the annual Silent Night contest. Fans will remain silent until the Vols score their 11th point.

Admission is cans of non-perishable food. Lee Williams will give a portion to area food banks, while some will be for the student body’s food bank.

At Coconino, the Lady Vols snapped a three-match losing streak Saturday with a 4-0 shutout of the Lady Panthers.

Lee Williams finished the regular season at 9-4 overall, 2-4 in the 4A Grand Canyon Region.

The No. 14 ranked Lady Vols now await their seed in the 4A State Tournament when the final rankings are released on Tuesday.

At Mingus, the Vols couldn’t cap the season with a bang Friday as they fell 3-1 to the Marauders.