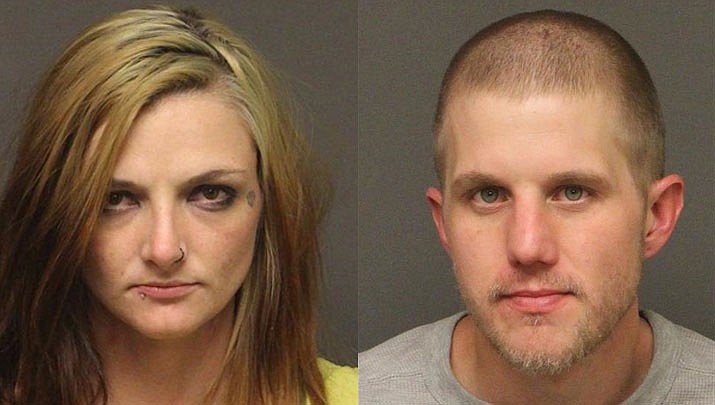 KINGMAN – Joshua Edward Cushing, 29, and Breanna Marie Alston, 29, both of Kingman, were arrested on suspicion of multiple felonies after a traffic stop Thursday, Feb. 6.

At approximately 9:20 p.m., Mohave County Sheriff’s Office deputies observed a silver sedan traveling north on Stockton Hill Road with an item hanging from the rearview mirror obstructing the driver’s view. A traffic stop was conducted and deputies contacted Cushing, the driver, and Alston, the passenger.

A search of the passenger area reportedly revealed a small black pouch that contained 0.3 grams of suspected methamphetamine and several small baggies. A further search revealed 6.3 grams of heroin and drug paraphernalia under the driver’s seat, according to law enforcement. A backpack was allegedly located in the back seat that contained approximately 2 grams of marijuana.

Cushing was arrested on suspicion of theft/control of stolen property, possession of a weapon by a prohibited person, marijuana possession, narcotic drug possession and drug paraphernalia possession, all felonies. He was also arrested on the active arrest warrant.

Alston was arrested on suspicion of theft/control of stolen property, possession of a weapon by prohibited person, dangerous drug possession and drug paraphernalia possession, all felonies. Both were transported to the Mohave County Adult Detention Facility.