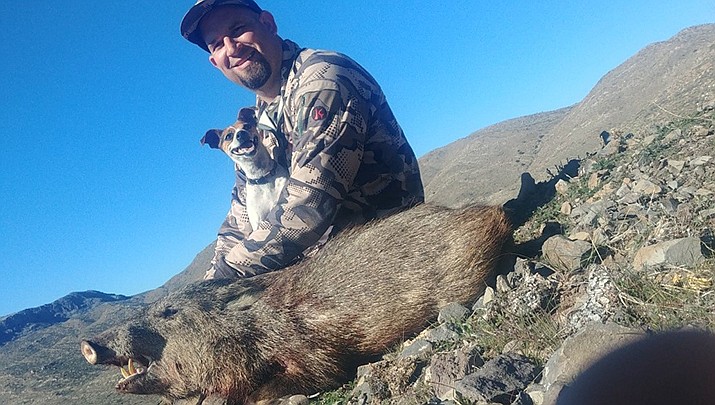 Dan Driggs of St. George, Utah, and his dog, Sage, admire the boar javelina that Driggs took on the second day of the HAM javelina hunt in game management Unit 18B. (Photo by Don Martin/For the Miner)

Last weekend had absolutely the best weather for hunting javelina in northwest Arizona, and many hunters were successful in Unit 18B.

The HAM (handgun-archery-muzzleloader) hunts opened in Arizona last Friday and almost 6,000 javelina hunters were in the field statewide seeking the second-most hunted big game animal in the state.

Many local hunters had some of the tags issued for game management Unit 18B, and a lot of them bagged their quarry.

I was with St. George, Utah, resident Dan Driggs, who is a great friend of mine and comes down for the HAM hunt almost every year.

Others in our camp were brothers Jay and Alan Chan, and a short distance away in another camp were Phoenix residents Cory and Brian Erpelding, along with a couple other friends. I have known Cory and Brian for many years and they like to hunt javelina in this unit.

On opening day I went out with Driggs to assist with glassing duties. We never saw a pig all day, though we did see over 50 elk – including three small bulls – along with seven deer, five of which were bucks. We also saw a couple of quail and a beautiful red-tailed hawk perched on a rock spire as it searched for a morning meal.

But others were finding javelina and getting it done. Brian, who was the only hunter in their camp with a tag, was done by 9 a.m.

Jay got his pig early and right at sundown Alan put down a big pig.

Almost everyone we had seen on opening day had tagged out.

On Saturday, it was another beautiful day. As the sun hit the mountains where Dan and I were hunting I felt confident we would see pigs and Dan would have an opportunity to fill his tag.

Turned out I was right. I spotted a single pig feeding on a flat just 100 yards away. Dan slowly moved to 75 yards and got set. But his shooting sticks broke and he had to shoot while sitting down.

When Dan fired, I saw the pig and it did not go down as I expected it would. Dan had got a bad case of “pig fever” as it is called. It happens to all of us at some time in our hunting career, but this was very uncharacteristic of Driggs. He normally is a crack shot.

Anyway, a second shot was in order and Dan ended up tracking the pig almost a half mile before he recovered it.

The one thing I saw that was impressive was how Dan was able to follow the trail of the injured javelina that was not leaving much sign for that distance. I think in most cases like that, the javelina would not have been recovered.

With Dan’s hunt over, we headed back to camp. We met up with local sportsman Steve Neuberger and his niece Sara Trischler and another friend of Steve. Seems that Sara had got a pig first thing on opening day while Steve and his friend both tagged out on Saturday morning. Last year I wrote a story about Sara who was on her first javelina hunt. Now she has taken two pigs on opening day two years in a row. “I had a great guide,” she exclaimed.

Later that day we met up with locals John Collins and his son. Seems that they had found a herd of pigs feeding up a hill and had managed to bag two of them.

I also wanted to say I was very pleased to have the wildlife manager for Unit 18B, Seth Sheer, stop by our camp and check licenses and tags. In the past there hasn’t been much of a presence of the AZGFD out there on these hunts, and it was nice to know that the new wildlife manager is out there checking with hunters.