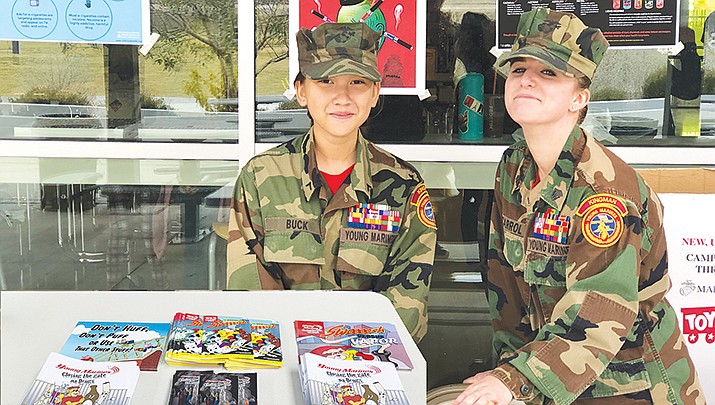 Kingman Young Marines want to honor and memorialize veterans who served and were lost during the Dec. 7, 1941 Pearl Harbor attack, but to do so, they need the community’s help.

Members of the group are eyeing a big trip – attending the 2020 Pearl Harbor Memorial Commemoration in Hawaii. Robert Skankey, unit commander of Kingman Young Marines, said the national Young Marines organization organizes a trip to the commemoration each year where Young Marines participate in parades, wreath-laying ceremonies and service projects such as beach cleanups.

“It would be a real honor to attend this special event to honor our veterans that gave their lives at Pearl Harbor,” said 13-year-old Young Marine PFC Ethan Falkner. “I would love to go and see the USS Arizona Memorial and the other ships that were there during this attack on the U.S.”

While there were challenges upon the inception of Kingman Young Marines in 2015, Skankey said the program is now in a position to try to make the trip, which has been named Operation Pearl Harbor Honors. According to youngmarines.com, the local unit is one of more than 250 serving 8,500 youths nationwide with a focus on leadership, citizenship through community service, self-discipline and living a healthy, drug-free lifestyle.

“When we decided to do this, obviously we needed to have kind of a purpose other than ‘Hey, let’s go to Hawaii,’” Skankey said. “It’s not about just going to Hawaii. So we came together and came up with the following main purposes.”

“The whole event is about the veterans that served and memorializing those who passed at the Pearl Harbor attack in World War II,” Skankey said of veteran appreciation.

As a retired Marine, Skankey said he knows the importance of leadership. That’s why Kingman Young Marines will focus on their leadership skills while on the trip, as the group will be broken down into teams, each with its own Young Marine leader.

“I appreciate how important leadership is, from personal leadership to being a positive influence on others and influencing them in a positive way,” he said. “By going on a trip like this, it allows Young Marines a better opportunity to have leadership opportunities.”

Even before the Young Marines head out to Hawaii, they’ll learn about Hawaiian culture, Pearl Harbor and WWII, particularly the Pacific campaign.

“I want the kids to learn something about where they’re going,” the unit commander said. “Learn about Hawaii, the culture, the military’s presence there, its role in WWII. Things like that.”

That’s one aspect of the trip that excites Falkner. Along with seeing the USS Arizona Memorial, the Young Marine said he would like to learn more about Hawaiian culture. Darius Martin, a 10-year-old Kingman Young Marine private, said he’s curious to see history first-hand, and to meet Young Marines from other places.

“This would be a great experience for any Young Marine to have,” Martin said.

The experience of the trip gives way to the last two areas of focus: character development and making memories. Skankey said that when kids leave their comfort zones on a trip like the one planned, it gives them the opportunity to test their character and learn more about themselves. Paired with the constructive activities that are in store, Kingman Young Marines will come away with unique memories to last them a lifetime.

But Kingman Young Marines need assistance to take the trip. Skankey said approximately 25 people plan to attend at a cost of about $1,250 per person.

“Any help getting us to our goal would be extremely appreciated,” Martin said.

Kingman Young Marines will hold fundraising efforts throughout the year, and the first is already up and running. Drawing tickets for a remote-controlled or kid-driven toy jeep cost $5 each or six for $20. The drawing will take place Nov. 12, 2020. To participate or for more information and involvement opportunities, visit https://youngmarines.com/unit/kingman/page or https://www.facebook.com/kingmanyoungmarines/.

“The reward of the experience is awesome,” Skankey said. “How do you put a price on that?”