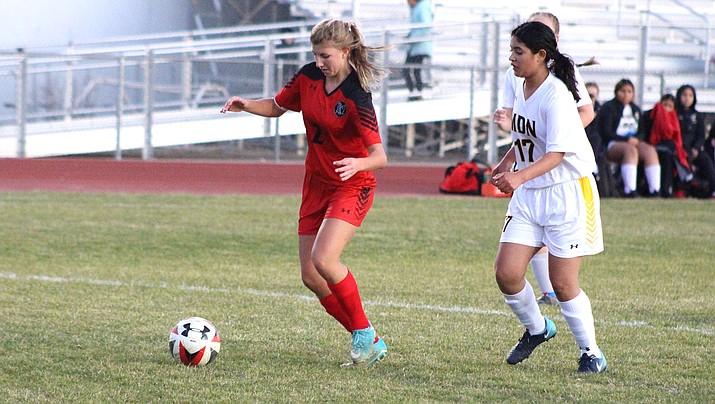 Lee Williams senior Kendra Pease finished the regular season with a school-record 19 assists, which also ranked first in the 4A Grand Canyon Region. Pease and the Lady Vols travel to Gila Ridge Thursday for a 4A Conference Play-In match. (Miner file photo)

KINGMAN – If it wasn’t for a canceled match in Yuma, the Lee Williams High School girls soccer team would likely be hosting a 4A Conference Play-In match for the first time in program history.

But instead, the Lady Vols have to travel 208 miles south to face Gila Ridge at 4 p.m. Thursday for a bid in the 4A State Tournament.

“I’m going to have to get them to stay pumped up still,” said Lee Williams head coach Chris Selby. “They were expecting to get a home-field match and they deserve it. To have it taken away kind of hurts. We have to keep their spirits up.”

Gila Ridge and Estrella Foothills were scheduled to battle for a region title Monday, but it was canceled due to rain and that allowed Gila Ridge to win the region based on conference record.

The Lady Hawks finished No. 23 in the final rankings released Tuesday, but earned the No. 17 seed in the 4A Play-In Tournament based on conference rules stating region champions get to host a match.

That along with two other region champions, Lake Havasu from 16 to 14 and Dysart from 20 to 15, dropped the Lady Vols to No. 17 in the bracket, which forced them to make a long road trip.

“We thought we were going to have a home match because we were ranked No. 14,” Selby said. “We won our last game and the team ahead of us in the rankings lost, so we expected to stay there or move up a little bit. But none of it happened.”

Nevertheless, Selby isn’t letting that get in the way of the task at hand – beating Gila Ridge and clinching a spot in the state tournament for the first time in school history.

“We have a good chance to beat them,” Selby said of Gila Ridge. “They only beat Lake Havasu 1-0. I think we match up pretty well with them.”

The Lady Vols capped the regular season with a 4-0 shutout of Coconino Saturday led by Mackenzie Cathey’s two goals to give the sophomore a school-record 37 for the season.

Cathey opened the scoring Saturday off an assist from Kendra Pease and added another later in the half.

Natalie Sanchez tallied the Lady Vols’ other first-half score to give her a personal-best five goals this season.

Pease rounded out the goal scorers on a penalty kick in the second half. The senior finished with nine goals on the year and a school-record 19 assists.