Gospel of Matthew’s message rings loudly for some 2020 Dems 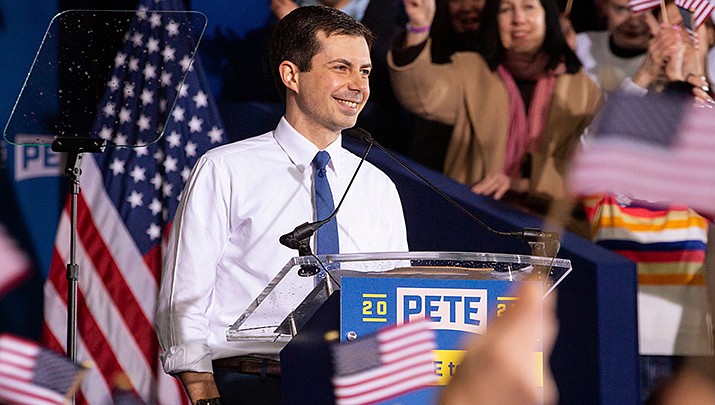 Pete Buttigieg is just one of the candidates for the Democratic nomination for U.S. president who has involved the Gospel of Matthew in his campaign. (Photo by Gary Riggs, cc-by-sa-4.0, https://bit.ly/2OTNNNL)

NEW YORK – When Pete Buttigieg launched his first statewide television ad in South Carolina two months ago, its opening lines may have sounded familiar to a churchgoer.

The ad opens with footage from a speech by the former South Bend, Indiana, mayor in which Buttigieg says that if he’s elected president, Americans wouldn’t have to ask themselves, “Whatever happened to, ‘I was hungry and you fed me? I was a stranger and you welcomed me?’”

Buttigieg is hardly the first Democrat to invoke the biblical verses of Matthew 25 in which Jesus Christ reminds his followers that their true measure comes from how they treat “the least of these my brethren.” Former President Barack Obama quoted from that biblical passage in 2008, while addressing popular megachurch pastor Rick Warren’s congregation during his first White House bid, and a political action committee that helped Obama’s campaign that year was dubbed the Matthew 25 Network.

But in this year’s Democratic primary, where several candidates have routinely discussed faith as they try to connect with religious voters, Buttigieg isn’t the only contender to invoke the Gospel of Matthew’s central value of helping those in need. As conservative evangelicals continue to make up a critical part of President Donald Trump’s base, the message of Matthew 25 – which calls for feeding the hungry and giving a stranger safe harbor -- allows Democrats to make a strong contrast between the spirit of their policymaking and that of Trump’s.

Massachusetts Sen. Elizabeth Warren, for one, has invoked Matthew 25’s verses about “the least of these” more than a half-dozen times in public forums since her campaign started, including last week at a New Hampshire town hall when she urged a more compassionate immigration policy. She has emphasized the passage since her political career began, also citing it during her 2012 Senate campaign.

Matthew 25’s “universal theme” resonates beyond the Christian faith, said Derrick Harkins, the veteran pastor who now serves as the Democratic National Committee’s national director of interfaith outreach. Harkins likened the New Testament passage to the Jewish value of tikkun olam, or positive acts to heal the world, which Bernie Sanders’ Jewish outreach director has cited in talking about the non-observant Jewish senator’s interpretation of his faith identity.

“It gives traction to one’s religious identity. It gives a tactile, real contrast - not only what do I believe, but what do I do in light of that belief?” Harkins said in an interview.

Eric Sapp, a longtime faith adviser to Democratic candidates who now leads the data firm Public Democracy, said that talking about the values conveyed by Matthew 25 is “a very simple way to convey a deep truth and faith positioning.”

“It can be exceptionally effective when used that way, and used as a way to unify, to show I’m connecting with you, not this is why you’re wrong,” said Sapp.

Even so, at times Democrats have used the biblical passage to draw a sharp line between their perspective and Trump’s.

Democratic National Committee Chairman Tom Perez, who has described himself as “a Matthew 25 Catholic,” used that moniker in 2018 to respond to a report of migrant children dying in U.S. custody.

“I was taught that if someone is a stranger, you welcome them into your home,” Perez tweeted, calling the report “infuriating.”

Another prominent Democrat and former presidential candidate, New Jersey Sen. Cory Booker, candidly discussed his own response to Matthew 25 in an interview last year with Jim Wallis, an influential religious progressive who has described that passage as a conversion text that connected him to Christianity.

Booker told Wallis that when he dug into the verse for the first time, “I realized I don’t live like that” and felt inspired to match more of his actions to the selfless message of the text.

Despite the primacy of Matthew 25 for some Democrats running this year, it’s hardly the only biblical verse that the party’s candidates have publicly elevated in discussing their faith.

Booker quoted Galatians 6:7, which states “whatever a man sows, this he will also reap,” in an August speech about gun violence, and alluded to Micah 6:8 at a CNN town hall last year where he vowed to defend LGBTQ rights while maintaining his faith. The exhortation in Micah 6 to “walk humbly” with God also featured in the inaugural address of former President Jimmy Carter, a devout Baptist.

Former President Bill Clinton, for his part, cited Galatians 6:9 in his first inaugural address — the same verse that Hillary Clinton cited in her concession speech after losing the 2016 election.

The passage in question warns believers against getting “weary in doing good, for at the proper time we will reap a harvest if we do not give up.”

Steak, beer and politics: 2020 Democrats descend on Iowa
Column | Dems’ diversity is only in the back of the bus
Column | Hollywood says hooray for Mayor Pete
Column | This debate was a moderated mess
Sanders edges Buttigieg in NH, giving Dems 2 front-runners
Event Calendar