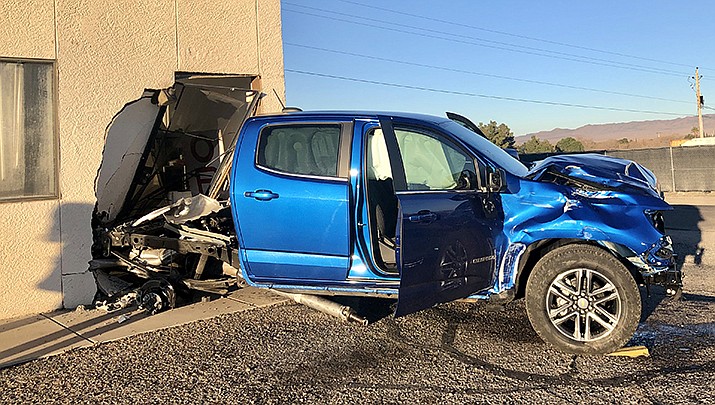 The Mohave County Sheriff’s Office suspects it was a medical episode experienced by the 65-year-old driver of a Chevy truck which caused the vehicle to increase speed and eventually collide with a business on the corner of Van Nuys Road and Northern Avenue. (MCSO photo)

KINGMAN – A truck that reportedly left the roadway and struck multiple mailboxes, advertisement banners and a business sign pole along the north side of Northern Avenue eventually collided with a business on the corner of Van Nuys Road and Northern on Wednesday, Feb. 12.

Mohave County Sheriff’s Office deputies responded to the area at about 4 p.m. A blue 2020 Chevy pickup truck had been traveling west on Northern Avenue, at which time the sheriff’s office says it is suspected the 65-year-old driver suffered a medical episode that caused him to accelerate to a high rate of speed.

The truck left the roadway and struck multiple mailboxes, advertisement banners and a business sign pole with a concrete foundation. The bed of the truck was ripped from the frame before landing on the south side of Northern Avenue. The truck continued west, spinning several times before colliding with the business.

The driver was transported to Kingman Regional Medical Center but sustained minimal injuries, as he was wearing a seatbelt and the airbag deployed.

Several residents stopped to assist and traffic was diverted around the area for about two hours due to the amount of debris in the roadway. No business owners, employees or pedestrians were injured in the incident. One vehicle at one of the businesses sustained minor damage from an airborne mailbox.