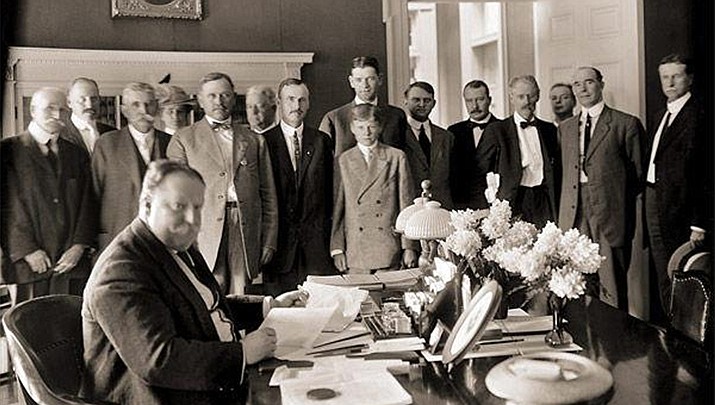 As Arizona celebrates its 108th anniversary of joining the Union today what many people don’t know is that its march to statehood nearly didn’t happen.

It was the height of the progressive movement sweeping the country, a time when people were trying to improve federal government in terms of openness and inclusiveness, and do away with rampant corruption.

Framed in 1910, Arizona’s first and only constitution was highly progressive by contemporary standards because it was shaped by labor-friendly Democrats led by George W.P. Hunt who served as president of the state’s constitutional convention and later its first governor.

The goal of the progressive movement was to allow more people to vote and participate through the devices of direct democracy – initiative, referendum and recall – self-determinant actions that posed a threat to the U.S. Congress and the presidency of William Howard Taft.

The federal government feared that voters would embrace the ability to bypass Congress through the ballot initiative, adopt their own state laws through the referendum and become empowered with the ability to remove elected officials and the judiciary from office through recall.

Arizona became a state at the peak of the Progressive Movement.

Speaking to the state’s first legislature Hunt said the movement was “The most definite expression ever pronounced by man, of a social and political organization in which every citizen is the equal before the law … and government is truly by consent of the governed.”

Hunt and the progressive faction in Arizona – as well as many other states – wanted to reform politics so that it was more reflective of the peoples’ wishes and not of special interest groups, said David Berman, professor emeritus of political science at Arizona State University.

“There was a great drive to use state government as an instrument to put a harness on the power of large corporations and its influence on the federal government,” Berman said. “In Arizona, railroads and mining became the object of some concern by the reform movement within the Democratic Party.”

At the time, Arizona’s economy was deeply influenced by big business. Workers struggled in their fight for an eight-hour workday, a ban on child labor and clean and sanitary conditions at home.

“The gut of the movement was anti-corporation, the growth of big business, trusts and monopolies and the threat to workers,” Berman said.

“There was a great deal of labor discontent in Arizona and the rest of the country. All of a sudden, you were not a craftsmen, but working for large impersonal corporations. As a result, a strong union movement emerged in Arizona.”

Public dissatisfaction was not limited to business. Voters were becoming increasingly unhappy with government, Berman said.

“In the progressive movement, you had so many kinds of reforms with people unhappy with slums, with health and sanitation, it was a multisided movement,” he said. “The idea was to free up government from corruption. Big corporations not only controlled the economic life, but they ran the government. You had political bosses working with corporations in tandem to do whatever they wanted. Corruption was a serious problem.”

Many desired, Berman added, for various reforms, giving the public a greater input into the process of government.

“If the Legislature did something people didn’t like they wanted to force the action to be put on the ballot,” Berman added.

Although initiative and referendum were viewed as power tools it was the recall of judges that stirred a hornets’ nest in Washington D.C.

“President Taft was very much opposed to the idea you could recall judges, contesting what they did and putting it on the ballot to kick them out of office,” Berman said. “Taft felt this would intimidate judges that they should be removed from the politics of the process and above all of that, but Arizona voters didn’t think so.”

But, President Taft demanded that the recall provision was removed from the state’s constitution.

“Taft was going to veto statehood unless it was removed,” Berman said. “Taft wasn’t going to tolerate giving voters the right to recall judges, so it was removed, but when we became a state the first thing we did was to put recall back into the constitution. This was always a matter of pride that we stuck it in the eye of the president.”

Originally part of New Mexico, what would become Arizona was ceded to the United States in 1848 following the Mexican-American War, and became a separate territory in 1863.

On Feb. 14, 1912, the long fight for statehood ended when Taft signed the bill admitting The Baby State, now known at The Grand Canyon State, into the Union. At the time 200,000 people lived in the mostly rural areas of the state.