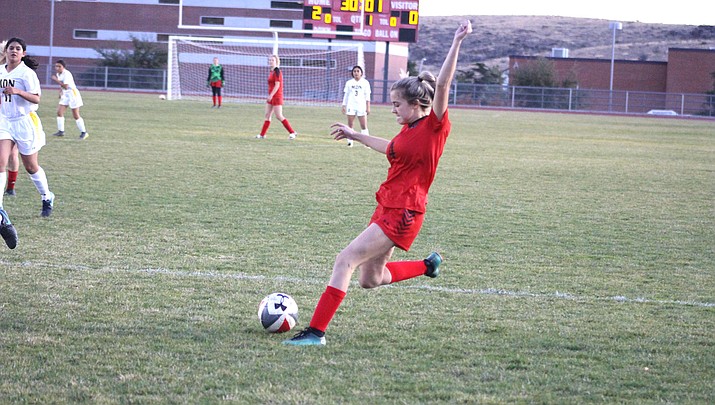 KINGMAN – The Lee Williams High School girls soccer team was in a good position Thursday as no one had scored entering the second half of its 4A Conference Play-In match. But then misfortune struck and it shifted the momentum the wrong way in a 4-1 loss to No. 16 seed Gila Ridge.

“About three minutes into the second half, senior center back Jocelyn Graffius took a ball to the face and (Gila Ridge) had no trainer,” said Lee Williams head coach Chris Selby. “The ref had to make the call and he determined that she wasn’t going to be allowed to come back on the field, period, because she took a ball to the face.

“That changed the whole aspect of the game for us,” Selby continued. “We had to make some changes not having her back there and we don’t have a lot of depth. It was just a shock to the team and Gila Ridge scored right after that.”

The Lady Vols were dealt another setback about five minutes later when Maritza Saucedo took a ball to the face and couldn’t come back on the field.

“I lost both of those players for the second half of the game,” Selby said of Graffius and Saucedo. “And they’re both defenders. Right after that, they scored again. It kind of took the sail out of our ship, you could say.”

Lee Williams did get on the scoreboard though, as sophomore Alysiana Martin found the back of the net on a header off a corner kick. Kendra Pease notched the assist, her program-best 20th of the season.

“It was a tough loss, but they all gave 100 percent effort,” Selby said. “Even when we went down, they never stopped. I always appreciate that. As long as they give their best effort, it doesn’t matter what the outcome is.”

That motto won’t change as the Lady Vols look to carry their success over to next season. They lose Graffius, Pease and three other seniors in Natalie Sanchez, Tina Laegdhelm and Maritza Saucedo, but welcome back a number of underclassmen along with juniors Abbey Seavey and Shayla Mayberry.

“It was a good season. We accomplished all of our goals,” Selby said. “The development of the youth was important this season. And with the new players that are coming up, we’re going to have a really strong team next year, too.”