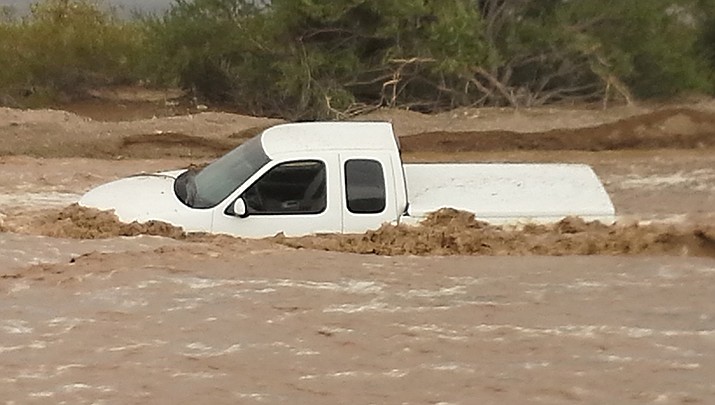 This pickup truck washed down stream during a 2014 flash flood on Stockton Hill Road. Note the water is relatively smooth, indicating it’s too deep to cross. (Photo by Luis Vega/For the Miner)

Mohave County doesn’t have cold mountain streams that flow year-round, what most think of as swift water. Our version is flash floods produced by heavy rains in the mountains. These rains can quickly turn a dry wash into a roaring and violent torrent that can be deadly. Most residents have a healthy respect for flash floods. The best course of action when driving is to be patient at a flooded wash and wait until the water stops, usually within one to two hours.

Education is the best preventative measure to be safe around swift water. How can you anticipate a flash flood? What should you do if you’re driving and encounter a flooded wash? If, for some reason, you’re swept away in a flood, what should you do? These are all topics I covered when I taught swift water rescue. Probably more than the average traveler needs to know, but it’s better to be informed than be in a flash-flood situation and not know what to do.

The county has a great system to advise residents of road closures and cameras where road crossings of washes can be seen on the web. Go to the county website, select Government Departments, Flood Control and ALERT Flood- Weather cameras. The county will also send twitter notifications of roads closures; go to https://twitter.com/mohaveinfo.

During flash flood season, generally June to September, the first level of awareness should be to look at the sky. If the clouds are on top of the Black Mountains and it’s raining heavily, it’s a good bet that the west side of Golden Valley is going to flood. Roads like Egar and Bolsa will be cut by high water. If the clouds are in the Cerbats, the east side of Golden Valley will flood, along with north Stockton Hill Road on the east side of the Cerbats.

Be aware that there are times when no clouds can be seen overhead but there could still be a flash flood danger. Parts of the Hualapais are like this. You might be wheeling in Deluge Wash under sunny skies and if it rains at the top of the mountains, you could be in trouble. There’s a reason why it’s called Deluge Wash.

While working in Central America, I learned to read the water because flooding was a common occurrence. If the water running over a road had lots of small ripples (similar to what it looks like when a school of carp are surface feeding), I knew the water was shallow and I could drive across. As the water got deeper, the ripples would disappear and the surface would have a smooth look. This was a sure sign to wait. It took a lot of practice to read the water correctly so I wouldn’t get washed away.

Once I fell into a swollen river in Costa Rica when the bank I was standing on caved in. If this ever happens to you, don’t try to stand up. As you’re being washed downstream your feet might get trapped by trees or roots and you’ll drown. Float on your back with your legs downstream so they can push off of obstacles. Look for an eddy (current going upstream near the bank) and swim for it. Once in the eddy, stand up and climb out.

A handy piece of gear everyone should have around water is a shallow-water-crossing stick, aka shovel handle. These are available at Home Depot for $6 and can be used to probe the depth of water, stabilize a person near the water and as a cross support if you step in quicksand. While searching for the people washed away at the 2015 Colorado City flash flood, one of our searchers stepped in quicksand and sank to his waist. The only thing that stopped him from sinking more was that he held his shallow-water-crossing stick across the sand. He was suspended like an olive on a tooth pick.

I cringe when I watch news reports and see untrained people trying to rescue someone trapped in a car in the middle of a raging wash or river. They usually hold hands, forming a human chain as they try to cross the water to the vehicle. Common sense tells us that the force of the water is greatest against anything that has a large surface area facing the current. Trying to span the river is the worst thing to do. In swift-water training a method called shallow-water crossings is used where several people stand in a “V” shape with the V pointing into the current. In this way the surface area exposed to the current is reduced. The shallow-water-crossing stick is used by the person in front to stabilize himself and the others push against him against the current. They walk sideways to the vehicle, get the person out and placed him in the center of the V. Everyone then crosses back to shore.

The best option is to stay out of a flash flood altogether but information is powerful. Know what to do if you come across a group attempting to reach or rescue stranded individuals in a flooding wash or river. Don’t join the hand-holders. Do it the correct way.

If you have comments or want to share experiences, write me at mohave4x4@yahoo.com.