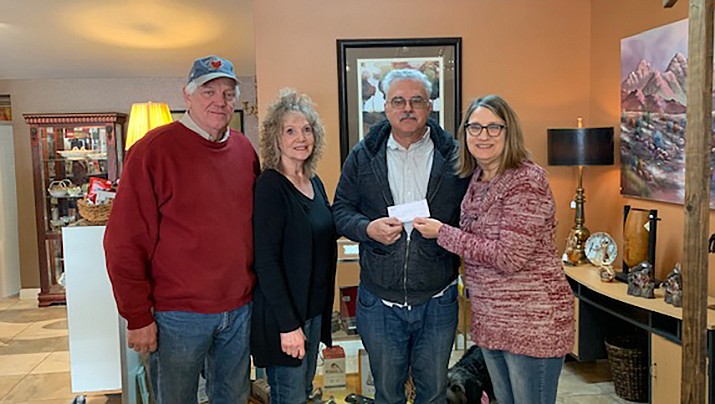 Pictured are Don and Annie Fuller of Annie’s Art Attic, left, and David Hunter of Our Daily Bread, center. He is being presented with a $500 check from Art Attic board member Jean Amico. (Courtesy photo)

KINGMAN – Annie’s Art Attic recently presented Our Daily Bread with a check for $500 to help the latter provide food for numerous local organizations, schools and people in need.

Our Daily Bread has been providing free sandwiches for children, parents and seniors since 2013. The effort began as a way to help feed seniors who were struggling financially, but its scope has since expanded. David Hunter, who began the program with his wife, Diane, said that more sandwiches are made each year than the year before.

Sandwiches are made at St. Mary’s Roman Catholic Church by volunteers before being frozen and eventually picked up by distributors. One such distributor is Annie’s Art Attic, and owner Annie Fuller believes Our Daily Bread is doing great work for the Kingman community.

“We do pass out about 400 sandwiches a week here,” Fuller said. “We participate in their ministry into our neighborhood, so they’re really close to our hearts and they’re really affecting people all over Kingman. They’re doing a great job in our community.”