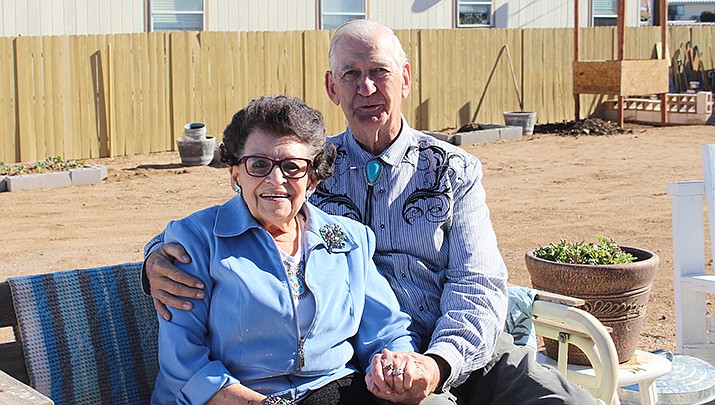 He asked her to become his wife two weeks after they met, but she kept saying no.

It was 1971 and Frank Jones, a young Army photojournalist, was home from his deployment in Korea. Home back then was Riverside, California, and Viola was one of three women introduced to him during his short vacation.

She refused when he first proposed, thinking that’s too quick, but they stayed in touch after he left. Six months later, nagged over and over again, Viola agreed.

They had a Valentine’s-themed wedding – red and white – because they were married on Feb. 12, 1972. It was a big wedding, a real feast, because Frank’s sister was a gourmet chef. Viola remembers her vail caught fire from a candle and gave them a scare. Frank remembers a man who gave him a ride for free so he could attend his own wedding.

But even though they remember their 35-year long first marriage as happy, the couple divorced. That happened much later in their relationship, when Frank’s job kept him far from his family, their two sons already grown. He was working in California. Viola stayed in the house he bought for her in Oklahoma, close to their sons.

“We never said a bad word to each other,” Frank said. “We simply felt that after 10 years of living in two different places, we grew apart.”

Frank filed for divorce and started to date other people. He never found anyone he could consider a long-term partner. And he never really stopped talking to Viola, who never dated anyone else.

“I don’t think we ever stopped loving each other,” Frank said.

It took them 13 years to get back together, but this March they will celebrate the first anniversary of their second marriage. The courtship was similar to the first. Frank proposed, several times. Viola said no. And God intervened.

“He told me he wants to restore our marriage,” Viola reported.

So were all those years – 23 years with the divorce and the separation – a waste of time?

“I think we needed this time to think,” Viola said, “because that’s how we realized we missed each other.”

“I don’t think we were ever divorced in God’s eyes,” Frank said.

They reunited at the Seattle airport. She was traveling from Alaska and wasn’t expecting him to be there to pick her up. He proposed again, and she accepted.

They got married in Seattle on March 24, 2019. Then they came to Kingman, where Frank had already settled. They believe they have a bunch of happy years ahead of them. Viola is a fervent reader, Frank spends his time online, involved in politics.

“It’s been working out really well,” Viola said. “I have a trust in God.”

And what do their sons think about their divorced parents’ new-found love?

“They love it,” Frank said. “They encouraged us to stay close all those years when we were apart. If we stayed on good terms, it’s also thanks to them.”