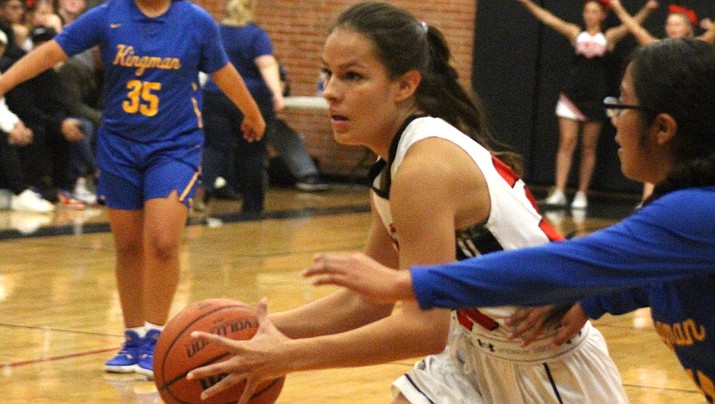 The Lee Williams High School girls basketball team experienced that this past weekend at the Prescott Winter Classic, but bounced back in the final contest with a 40-38 overtime win against Phoenix Country Day.

“This was a great tournament for us,” said Lady Vols head coach Jerry Arave. “We played some really good teams and all four games were very close. We played the best team ball we have played all year.

“The girls were sharing the ball and making the extra pass,” Arave continued. “It was a great way to end the preseason and get ready for the big push in region play in January.”

Lee Williams’ final game of the tourney was far from easy, as it had to rally back from a 14-6 first-quarter deficit. Alexis Hecker and Amya Sellars helped turn things around as the duo was instrumental in holding Phoenix Country Day to three points in the second quarter.

The defensive intensity carried over to the other side of the court as Lia Lucero scored seven of her team-high 12 points in the quarter to give the Lady Vols an 18-17 halftime lead.

It remained a back-and-forth affair until late in the game when Lee Williams took a three-point lead with 15 seconds remaining. However, the Lady Vols were forced to play overtime as Phoenix Country Day sank a buzzer-beating 3-pointer.

Lee Williams eventually captured the win as it scored all of its six points in overtime from the charity stripe.

Lucero led the Lady Vols with 12 points, followed by Liberty Cronk with eight, Savannah Jimenez with six and Hayle Davis with five.

Lee Williams tallied its other win in the tournament with a 41-38 decision over Youngker. The Lady Vols caught fire on offense, scoring 26 first-half points, their best offensive first half of the season. A big part of the hot start was 16 first-quarter points.

Alexis Hecker’s defense was also instrumental in the second half as the senior shut down Youngker’s main scorer to give Lee Williams a victory.

Davis paced the Lady Vols with 14 points, while Jimenez added 10 and Becca Arave had six.

“Hayle (Davis) played outstanding on the offensive end,” the coach said. “She even recorded two steals in a row and finished both with layups to help extend our lead. All the girls played great team ball.”

The Lady Vols narrowly fell to Prescott 23-22 in a defensive battle that is sure to be a forecast of their matchups on Thursday, Jan. 9 and Tuesday, Feb. 4.

“You never like to lose, but I was proud of the girls for fighting so hard to stay in the game,” the coach said. “We came up with steal after steal, but we couldn’t get the ball to go in the basket.”

That was especially true in the final minute of the game as Lee Williams inched within 23-22, but couldn’t tie or take the lead in the loss.

Lee Williams’ other setback was a 61-45 decision to Apollo that still showed positive signs for the offense.

“We had three girls in double-figures for the first time this year,” the coach said. “So even though we lost, I am happy with the increased scoring and effort by all the girls.”

Cronk led the way with 15 points, followed by Becca Arave with 12 and Davis with 11.