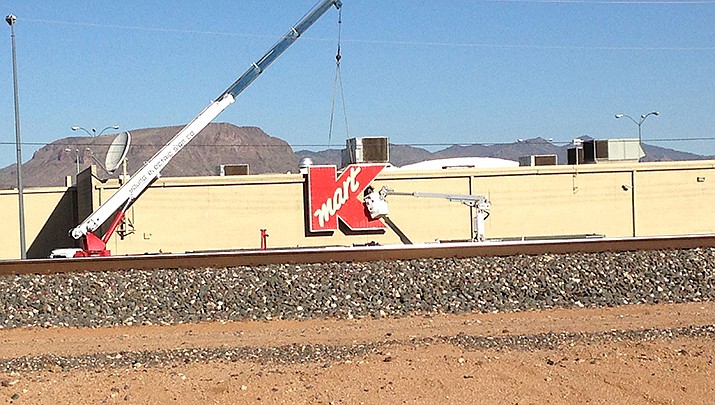 Workers are shown removing the Kmart sign from Kingman Plaza after the store closed in 2017. The owners of the complex are offering a $1,000 reward for information that leads to the arrest and conviction of the person or persons who have been breaking windows in the empty plaza. (Miner file photo)

KINGMAN – A $1,000 reward is being offered for information that leads to the arrest and conviction of the person or persons responsible for vandalizing the former Kmart building at Kingman Plaza.

Ben LaParne is the owner and managing member of Kingman Plaza LLC, the entity that owns the building at 3340 E. Andy Devine Ave. He said the building was vandalized Dec. 30, Jan. 1 and again on Jan. 2.

“There have been vandals that have blown out just about every glass window that I have in that shopping center, including the new Ashley storefront,” LaParne said.

Three reports have been filed with the Kingman Police Department in reference to the vandalism, which according to LaParne, resulted in damages in excess of $20,000.

And while the location has seen vandalism in the past, including graffiti, LaParne said such incidents were relatively minor.

“But you blow out these big panels of glass, and they are very expensive to replace,” he explained.

The windows have since been covered with plywood to preserve the integrity of the building, but LaParne still wants to see those responsible held accountable. To that end, a $1,000 cash reward is being offered for information that leads to the arrest and conviction of the vandal or vandals.

Anyone with information about the incidents can contact KPD at 928-753-2191. Mohave Silent Witness can be contacted at 928-753-1234, and tips can be reported online by clicking on “Give a Tip” at https://www.cityofkingman.gov/government/departments/police-department.