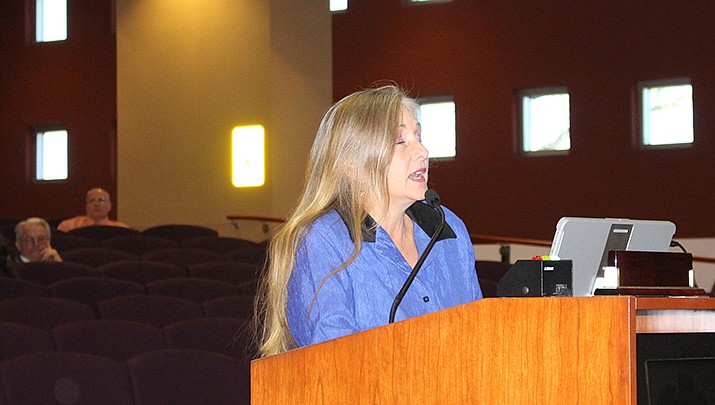 Jennifer Esposito of Kingman speaks against a new animal control ordinance at the Mohave County Board of Supervisors’ meeting on Monday, Jan. 6. (Photo by Agata Popeda/Kingman Miner)

KINGMAN – A new animal control ordinance was approved by the Mohave County Board of Supervisors on Monday, Jan. 6, but not before it was amended to allow dogs to run at-large on their owners’ properties without being leashed.

Three local residents spoke during the public comment portion of the meeting, and expressed their concerns with the draft of the ordinance and confusion regarding the legality of dogs running loose on unfenced properties.

County Attorney Ryan Esplin, who drafted the ordinance over the past year, explained that under the new law most dogs can run free on their owners’ properties regardless of the size of the property and whether or not it is fenced.

“The animals that cannot be left at-large are a dog in heat, a vicious dog, and a dog that is in a rabies quarantine,” Esplin said.

At the same time, the new ordinance orders that dogs, when not on their owner’s property, be leashed at all times. After one of the residents described how she likes to walk her dog without a leash on public land in the open desert, Esplin pointed out animal control officers have a lot of discretion and well-behaved humans with well-behaved animals are not likely to get into trouble.

But Supervisor Ron Gould of District 5 argued to the contrary.

“We need to remember that laws only control law-abiding citizens,” he said. People who break those laws “don’t give a dang and will not follow the rules anyway.”

Supervisor Gary Watson of District 1 warned against too much laxness in the ordinance. He recalled situations when his horses were attacked by dogs on public land.

County Manager Mike Hendrix inquired if people would be able to hunt with hunting dogs. Esplin said dogs used for hunting and those working in agriculture and law enforcement are permitted to run unleashed under the ordinance.

Jennifer Esposito of Kingman criticized the ordinance, asking the board to take more time and “do better.”

She said Esplin’s declaration that he tried to mirror state law while drafting the ordinance is possibly disingenuous.

“You can take time and craft a really good ordinance,” Esposito told the board, noting the ordinance should reflect the unique needs of Mohave County. “You can do better that this.”

Despite her criticism, the board voted 5-0 in favor of the new ordinance, which is expected to become law in two weeks.