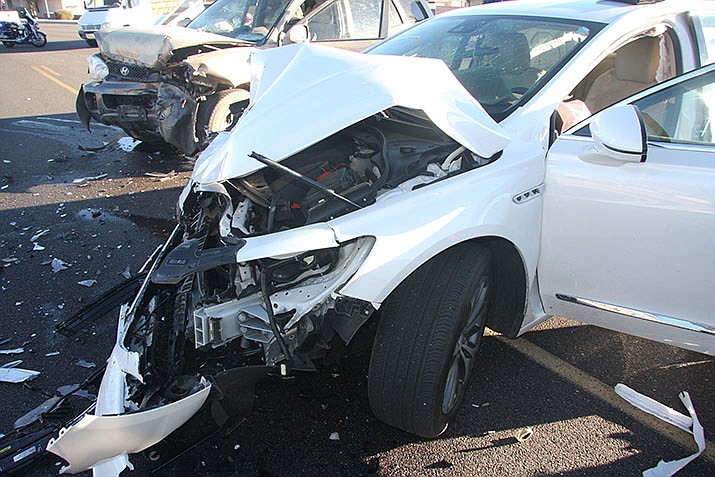 The driver and a passenger in the white Buick sedan sustained severe injuries after a head-on collision on Tuesday, Jan. 7 on Stockton Hill Road in Kingman. (Courtesy)

KINGMAN - Kingman police say they expect to file charges against a 19-year-old Kingman woman after a head-on traffic collision that severely injured a man and a woman on Tuesday, Jan. 7.

Police said in a news release that the 19-year-old was driving south in the 1000 block of Stockton Hill Road at about 9 a.m. when her Hyundai Santa Fe crossed the center line and struck a northbound Buick four-door sedan head-on.

The 69-year-old male driver of the car and an 80-year-old female passenger were flown to Sunrise Medical Center in Las Vegas with “severe, life-threatening injuries,” the news release said.

Investigators determined that the 19-year-old driver of the Hyundai, who reportedly suffered a broken arm, fell asleep at the wheel and failed to negotiate a curve. The news release said the investigation is ongoing, and charges are expected.

The roadway was partially blocked for over an hour.