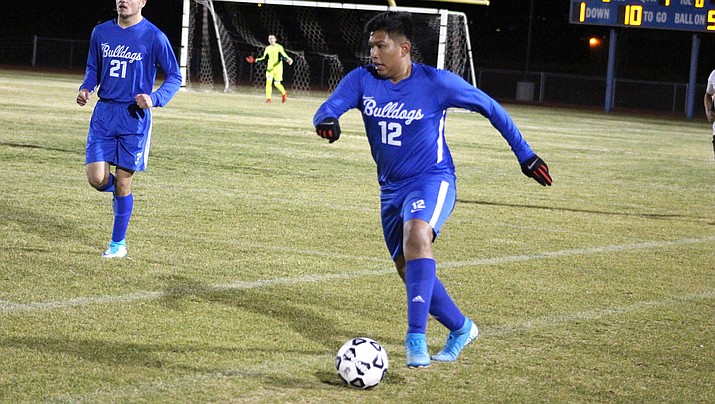 KINGMAN – The Kingman High School boys soccer team proved no deficit is too large as it rallied Tuesday for a 3-2 win at Paradise Honors.

“It was a great comeback win,” said Bulldogs head coach Kevin Roberts. “We had great ball control, good defense and great intensity. We are 2-0 in (the region) and taking it game by game.”

Kingman’s Juan Ipina scored the game-winning goal off an assist from Yahir Boo. Marcos Silva tallied the other two goals as the Bulldogs overcame a 2-0 halftime deficit.

John Michael O’Malley and Ipina each finished with an assist.

“The chemistry is gaining on every game with our defense,” Roberts said. “Charles Williamson had a great defensive match, gave good long balls.”

At River Valley, the Lady Tigers opened region play Tuesday with a 22-19 win over the Lady Dust Devils.

At KHS, the Lady Bulldogs suffered their fourth straight loss Tuesday in a 49-34 setback to Northwest Christian.

At River Valley, the Tigers fell just short Tuesday in a 44-43 decision to the Dust Devils.

At KHS, it was a tough Tuesday night for the Bulldogs as they suffered an 83-62 setback to the Crusaders.

At Dysart, the Vols’ slow start Tuesday proved costly in a 61-37 loss to Dysart. Lee Williams mustered just 12 points in the first half, while the Demons countered with 32 to take a commanding lead.

The Vols responded with a 17-point third quarter, but it was too little, too late as they saw their three-game winning streak come to an end.

At Paradise Honors, the Lady Bulldogs couldn’t find the back of the net Tuesday in an 8-0 setback to the Lady Panthers.