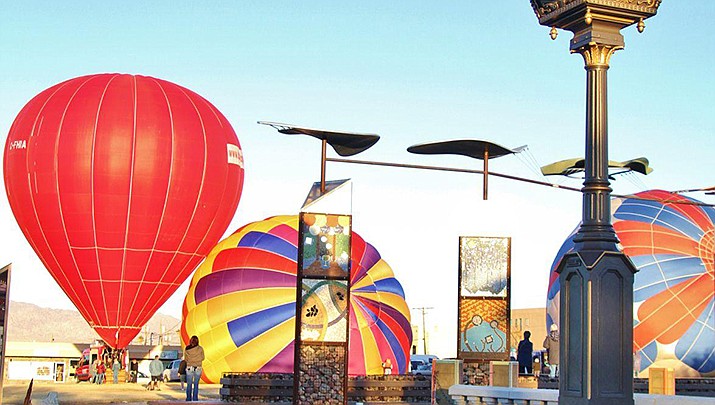 The festival offers a carnival with rides and games, food and merchandise vendors, live music, acts and demonstrations.

And then there is the centerpiece, the 75 hot air balloons. Flight Operations Manager Cheryl Maclean said 11 of balloons are special shapes, always a big hit with children. “We try to bring in different balloon shapes every year, to keep it interesting,” she said. “But we can only bring in so many. They take up more room on the field” than traditional balloons.

It takes the better part of a year to plan each Balloon Festival, said Becky Goldberg. She helps with Flight Operations and the VIP tent.

“We work year-round,” Goldberg said of the festival’s 30 committees that do the planning and staging of the event.

Jim Day is president of the festival board. He said 1,500 volunteers staff the four-day event. The non-profit festival has no paid employees. “We should hit the million-dollar mark this year,” Day said, meaning that the festival will have plowed back $1 million of its proceeds into Havasu charities over its 10-year lifespan. “Every dime we get stays in this community,” Goldberg said.

For hot air balloon pilots, Havasu’s festival is an exclusive event, Ticknor said. “For pilots, it is an invitation-only festival. We can accommodate up to about 75 balloons for safety reasons. We have a waiting list of about 65 pilots who want to bring their balloons to Havasu,” he said.

Goldberg explained the details of the safety issues.

“Havasu is a tight flying area. Our pilots have at least 100 hours’ experience and can land on a street or touch the water (of Lake Havasu). Those maneuvers take a lot of skill,” she said.

“Beyond that, there’s nowhere to land. Actually, there might be, but the landing areas could be behind fences or locked gates. Those places aren’t accessible to crews in chase vehicles,” she said.

Pilots don’t fly too far north, either, because of prevailing winds and lack of safe landing areas. Balloons can’t go near the airport.

Maclean said pilots are often asked where they plan to land the balloons.

“The truth is, they don’t really know. They’ll go where the wind blows them. That’s why they have a chase vehicle,” she said.

Another frequent question is why pilots don’t fly at night.

For hot air balloons, wind is Public Enemy No. 1. For flying, the ideal is light and stable winds of 4-6 miles per hour. Maximum safe winds are 8-10 mph. Gusts are bad news.

“We need everyone to pray for no wind,” Ticknor said.

More than 25,000 guests attend the Balloon Festival. Day said the state park has 160 RV reservations for this year’s event.

It takes 84 portable bathrooms to meet the crowd’s needs.

It also takes a lot of propane to keep the balloons in the air.

The average balloon uses 30 gallons of propane for a one-hour flight. However, a bigger balloon carrying more weight requires more fuel during a flight.

Admission: $15. The wristband is good all weekend.

Safety first: Smokers must step outside the festival grounds if they wish to partake. Organizers said ignition points in the vicinity of combustible propane tanks is a recipe for disaster. Also, no pets allowed.