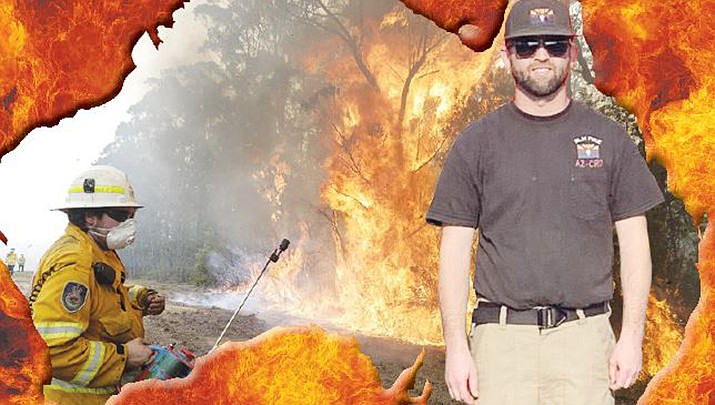 BLM Engine Captain Brady Shultz of Kingman is in Australia helping battle some of the worst bushfires the continent has ever experienced. (AP photo/Inset photo courtesy of Brady Shultz)

KINGMAN – You’ve probably seen footage of the massive wildfires that have been scorching Australia for months. A local firefighter has descended into the middle of the maelstrom.

Brady Shultz of Kingman, a fire engine captain with the federal Bureau of Land Management’s Arizona Colorado River District, deployed about a week ago to help fight the fires.

He told the Miner on Wednesday, Jan. 8 that he is one of many volunteers from around the world, including 40 Americans, helping to battle the blazes, with more help on the way.

“At first, we were deployed to Queensland, but the fire slowed down there and they moved us around. Now we are more needed in Victoria,” said Shultz, who is assisting by helping operate a fire engine.

Australia’s wildfires started in September after a dry summer marking the continent’s hottest and driest year on record.

At least 25 people have died in the fires, with the Associated Press writing that as of Thursday, Jan. 9, the fires have burned an area twice the size of Maryland.

Along with the acreage burned, the fires have seen the destruction of more than 2,000 homes, according to the Associated Press. Australia’s World Wildlife Fund estimates that around 1.25 billion animals have been killed across the continent, including koalas, kangaroos and other species the world associates with Australia.

The U.S. firefighters were received by the Hillcrest Fire Brigade and were trained in the use of Australian fire trucks by local volunteers.

“Thank you to our U.S. counterparts for coming to Victoria to help us during our bushfire season,” the brigade wrote on their Facebook page. “With conditions worsening across the state, they’ll be put straight to action. The firefighters were put through safety drills and general familiarization on the tankers.”

The U.S., Australia and New Zealand have been exchanging fire-fighting assistance for more than 15 years. The last time the U.S sent firefighters to Australia was in 2010.

The Bureau of Land Management, as well as other Department of the Interior agencies and the U.S. Forest Service, have been sending wildfire personnel from across the country to assist with wildfire suppression efforts. The U.S. has intermittently deployed more than 150 wildland fire personnel to the continent since December.

Shultz, who lives in Kingman and is a graduate of Kingman High School, plans to be in Australia throughout January.

He is one of four BLM Arizona fire personnel currently in Australia, said Dolores Garcia of BLM’s Outreach and Fire Communications.