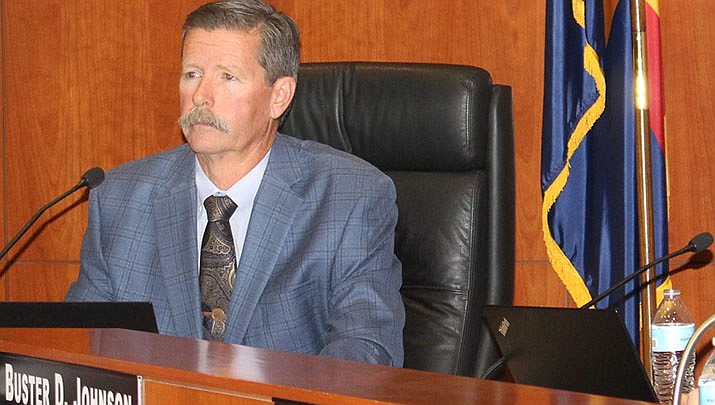 Supervisor Ron Gould listens during the Mohave County Board of Supervisors’ meeting on Monday, Jan. 6. (Photo by Agata Popeda/Kingman Miner)

KINGMAN – A contract to provide inmate telephone services and a video visitation system for the Mohave County Adult Detention Facility was awarded to ICSolutions of San Antonio, Texas, at the Mohave County Board of Supervisors meeting on Monday, Jan. 6.

Supervisor Ron Gould quizzed county staff about costs and new services in the contract. He was previously concerned about the high profit margin for the county when it is the family and friends of inmates that carry the cost.

“We do generate quite a bit of revenue,” confirmed Don Bischoff on behalf of the county jail. “But the cost of the service per minute dropped from 21 cents to 15 cents.”

He said the revenue goes to a special fund to benefit inmates, and is being used to buy hygiene products, clothing and bedding.

“In reality, those friends and families are helping to offset the cost of housing and providing for the inmates,” he said.

“The current on-site video system is failing,” Bischoff said. “But with the new program, we expect a big boost in the defense attorney communication with their clients in jail.”

Now, attorneys will be able to contact clients from their smartphone. Bischoff said the service will be free for legal, public and contracted defenders.

Bischoff explained a phone account can be opened and controlled by a family member or friend of an inmate. The person who opens the account chooses what other numbers the inmate can contact. If an inmate has their own funds from an outside account they can call whomever they want.