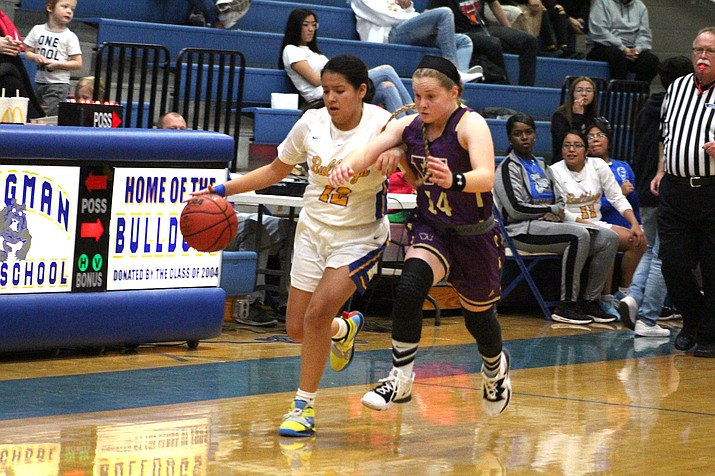 Kingman sophomore Shauntel Crozier tallied 12 of her 18 points in the final 4:32 of the third quarter Thursday to help the Lady Bulldogs tally a 57-45 win over Wickenburg. (Photo by Beau Bearden/Kingman Miner)

KINGMAN – It’s not often a player single-handedly goes on a 12-0 run and it’s even rarer when the athlete is wearing No. 12 on her uniform.

But that’s exactly what happened Thursday as Shauntel Crozier rattled off 12 straight points to end the third quarter to help propel the Kingman High School girls basketball team to a 57-45 victory over Wickenburg at KHS.

“Shauntel has taken on the role of leader of this team and I knew she would,” said Lady Bulldogs head coach Kevin Hubbard. “… She finds a way to get into really good spots. She doesn’t necessarily shoot bad shots and she doesn’t do too much. She just kind of sneaks behind you, just kind of finds her spot and hits a shot.

“I couldn’t ask for more out of her,” Hubbard continued. “She plays really well and it’s an awesome feeling to see her play like that and have her teammates, more importantly, find her.”

Crozier led Kingman with 18 points, with 12 of those coming in the final 4:32 of the third quarter. The Lady Bulldogs held a 35-27 advantage before Crozier found a spark that featured five baskets and a made free throw.

The sophomore even finished her run with a buzzer-beating layup to give Kingman a 20-point lead entering the final quarter.

But it wasn’t all Crozier, as Star Talayumpteua chipped in 15 points and Emilee Araya and Amber Lopez tallied six apiece. Three more Lady Bulldogs also got in the scoring column and that’s what Hubbard wants to see.

“I like getting everyone some playing time, seeing what people do well in here and there,” he said. “To be honest, we have a group where everyone is very talented. The fundamental skill is there. We just have to learn how to read the basketball game.

"If we read it, we get open shots, open looks and they’ll hit their looks every once in a while," Hubbard continued. "That’s all we can ask for; that they’re taking the right shot at the right time.”

Kingman lived up to those words at many times throughout the game, especially in the second quarter. The game was knotted at 12-all after the first, but the Lady Bulldogs flipped the switch and outscored Wickenburg 20-9 to take a commanding halftime lead it never surrendered.

“… I think we’re just about to make that turn to where the young team now sees where they can’t make mistakes,” Hubbard said. “If they start doing that, then you start putting runs together. And I think teams are going to be surprised at what we look like when we play.”