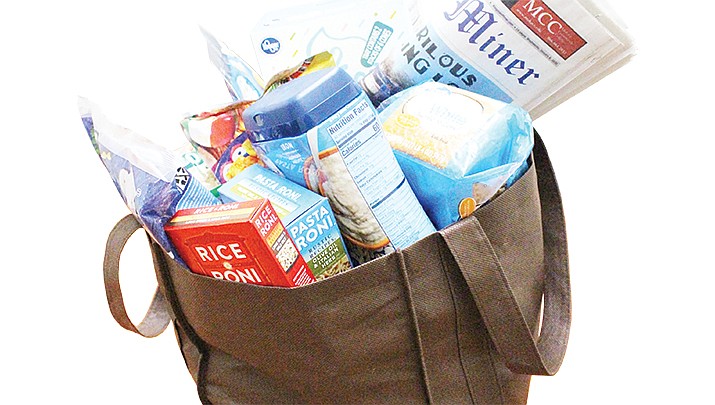 Smith’s Food and Drug leads local grocers in cooperating with the effort to reduce the use of plastic bags, reimbursing those who bring their own bags. (Miner file photo)

KINGMAN – The meeting was small and informal, but the goal is big and worthy.

A group of local activists met over coffee and pastries at Victoria’s Sugar Shack on Friday, Jan 10, to discuss the problem of plastic bags figuratively suffocating the Kingman area.

“They are ubiquitous! I have been driving around and I have seen plastic bags everywhere,” said Christine Meisenheimer of Kingman, who pushed for this meeting since September. “I’m not saying that this is the only issue we have to deal with in the Kingman area, but I couldn’t just wait anymore.”

After going over local resources and groups that could help, the attendees decided their best shot is to go to the next City Council meeting slated for 5:30 p.m. Thursday, Jan. 16 to jointly press for assistance.

They plan to try to get businesses involved, and merchants should be willing supporters, since they lose money providing plastic bags for free.

A key part of the platform is education, teaching fellow Kingmanites to adopt a lifestyle of reduce, reuse and recycle, and apply it to everything from straws to fashion.

“The problem is a lack of education,” participants echoed, hurrying to provide one anecdote after another.

Some problems were locally observed, like careless millennials generating needless waste with their fast food containers and countless water bottles. Others problems were global, like the Great Pacific Garbage Patch which covers a section of ocean twice of size of Texas.

One of the attendees was Clarence “C” Russell, a long-time member of the Kingman Clean City Commission board, who spoke about previous local efforts, which he described as somewhat successful, to encourage residents to use their own bags.

The commission produced and continues to hand out navy blue reusable bags on various occasions in front of local grocery stores. But the bags are an expensive giveaway, and people still tend to leave them home. Smith’s Food and Drug leads local grocers in cooperating with the effort to reduce the use of plastic bags, reimbursing those who bring their own bags.

Russell also described Kingman’s experience with recycling, and a history of residents contaminating recycling containers outside grocery stores by putting in the wrong items. The City had to move them from the grocery stores to the public works facility and only then did the situation improve.

“We finally made profit, $40, by the end of the quarter,” Russell said.

“It’s an uphill fight,” Meisenheimer admitted. “But change is not an event. It’s a process.”

Attendee Sharon Weber questioned the idea that recycling must be profitable to the City, given that in the long run, it’s something positive for the whole community worth spending money on.

The group joked that taxation would be a good solution, despite a collective understanding evidenced by their laughs and jokes that raising taxes in Mohave County isn’t easy.

Other topics included creative solutions implemented around the world to get rid of plastic such as incineration, a mutant enzyme that eats plastic bags, and using the best biodegradable bags available.

Bring Your Own campaign is looking for volunteers. For more information, email Christine Meisenheimer at createpeace10@gmail.com.

Miner Editorial | BYOB is A-OK for Kingman
Letter | Can we handle the recycling issue by ourselves?
Recycling program geared to solving blowing plastic problem
Community View | Waiting to see how bag business plays out
Community Viewpoint: A litter-free Kingman