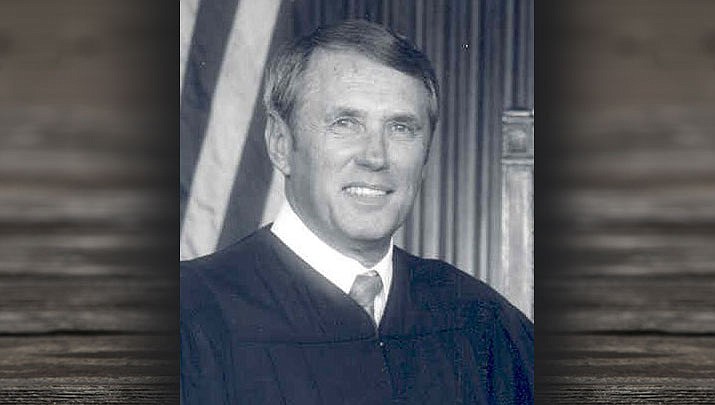 Retired Chief Justice of the Arizona Supreme Court, the Hon. Frank X. Gordon Jr., passed away on Jan. 6, 2020 at the Beatitudes Retirement Community in Phoenix where he lived with his wife Joan. Frank passed away three days before his 91st birthday.

Frank was an only child, born to Frank X. Gordon and Lucille (Gburek) Gordon on Jan. 9, 1929 in Chicago, Illinois.

The family moved to Kingman, Arizona in the summer of 1929. Frank graduated from Mohave County Union High School in 1947. He attended Stanford University graduating in 1951. While at Stanford, Frank met and married Joan Gipe just before the start of Frank’s senior year in college. Frank obtained his law degree from the University of Arizona, graduating in 1954.

The Gordons moved to Kingman after Frank graduated from law school. Frank practiced law there with his father from 1954 to 1962. Frank was appointed to the Superior Court in Mohave County in May of 1962 by Gov. Fannin. Thereafter, Frank was elected and served as a Superior Court judge in Mohave County for 13 years, from 1962 to 1975. In 1975, Gov. Raul Castro appointed Frank to the Arizona Supreme Court. From 1975 to 1987, Frank was an Associate Justice and then Vice Chief Justice of the Arizona Supreme Court.

Frank is survived by his wife, Joan; his children, Frank (Ruth Ann) Gordon III and Candy (Scott) Lander; grandchildren Brandee (Pete) Proffit, Scott K. (Jamie) Lander and Elisha (Joel) Blickenstaff; 12 great-grandchildren and many friends. His character and honesty earned him the respect of his fellow judges and lawyers and the citizens of the State of Arizona.