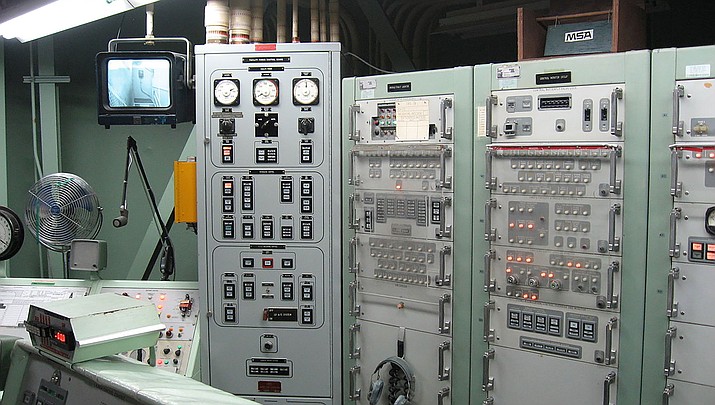 A pair of former Titan missile launch facilities in the Tucson area have been placed on the real estate market for about $500,000 each. The photo shows a Titan missile control room at the Titan Missile Museum in Sahuarita. (Public domain)

One of the sites about 10 miles north of Tucson comes with a dozen acres of vacant land and is on Arizona 77, officials said. The other site about 8 miles east of Benson includes vacant land, a quarter-mile access road and scenic mountain views overlooking the distant San Pedro River. There is already someone interested in buying both, but the sellers are still accepting offers, Hampton said.

Eighteen missile silos were built around Tucson during the nuclear standoff with the Soviet Union and were occupied by four-person crews ready to launch from control rooms built to survive any atomic threat, officials said.

When the Titan II missiles were decommissioned in 1984, the government caved in the silos with explosives, filled in the access shafts and put the properties up for sale, the newspaper reported. Most of the sites are now privately owned.

Rancher Grant Wilson owns the silo north of Tucson. His father bought the facility from the government in the 1980s, Wilson said. He says he has since used the facility as a playground and test track for his off-roading racing trucks.

The other silo is owned by retired nuclear technician Edward Schlinger, who said he grew up with an interest in missiles. The inside looks like it did when it was decommissioned, Schlinger said. Most everything has remained untouched except for some light fixtures that were restored.