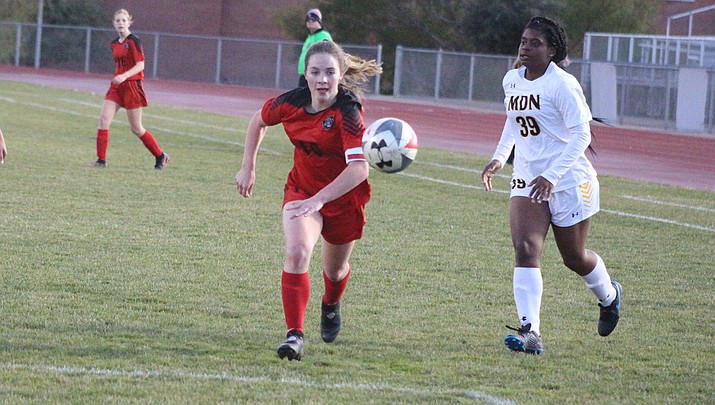 Lee Williams sophomore Mackenzie Cathey leads the state with 29 goals. The Lady Vols are ranked No. 10 in AIA’s first rankings of the season. (Miner file photo)

KINGMAN – The Arizona Interscholastic Association released its first girls and boys soccer rankings Tuesday as the 2019-20 season winds to its conclusion.

The Lee Williams High School girls soccer team is the top local squad at No. 10 in the 4A Conference Rankings, while the Kingman High girls sit at No. 44.

The Lady Vols are a perfect 6-0 entering their Tuesday contest with No. 33 ranked Lake Havasu, but the schedule is about to ramp up with six straight region contests.

The 4A Grand Canyon Region is no cakewalk either, as Prescott is ranked No. 1, followed by Flagstaff at No. 3, Mingus at No. 5 and Bradshaw Mountain at No. 7.

All four of those teams are on Lee Williams’ schedule, with a trip to Flagstaff (5-1) at 3 p.m. Friday.

However, Lee Williams has the firepower to win those games.

Lady Vols sophomore Mackenzie Cathey currently leads Arizona with 29 goals, but Gilbert Christian’s Hannah Burke is close behind with 27. Cathey is also ranked second in points at 64, with Burke in the top spot with 67.

Lee Williams senior Kendra Pease is on the radar, too, with 17 assists, which ranks third in the state.

The Bulldogs are 4-3 overall, 3-0 in the 3A Northwest Region and have four region contests remaining, including a home contest with No. 2 Northwest Christian (6-1, 2-0) at 6 p.m. Wednesday.

Fans can access the rankings via azpreps365.com and the AIA will update them at noon Tuesdays through Fridays during the soccer season.