Prep Roundup: Vols use strong 2nd half to beat Bulldogs 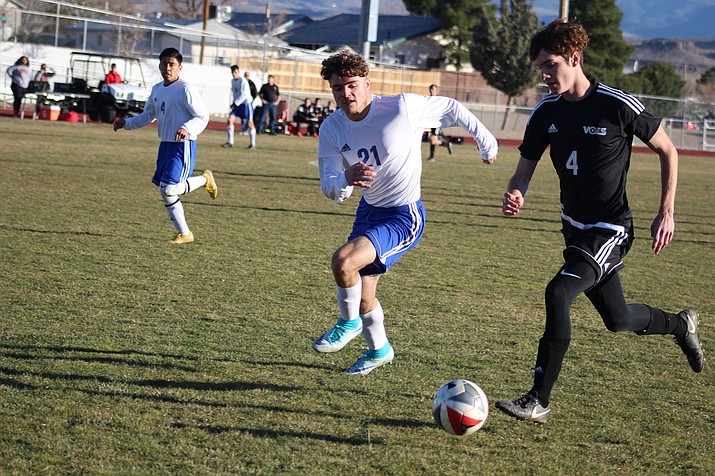 KINGMAN – It was a tale of two halves Monday as the Lee Williams High School boys soccer team overpowered crosstown rival Kingman High in a 10-3 victory at LWHS.

The Vols were in a back-and-forth battle in the first half, but stepped up the offense with six unanswered goals in the second half.

Lee Williams held a slim 4-3 advantage at halftime as Bulldogs junior Emannuel Anaya scored with 8:29 remaining to bring the Bulldogs within striking distance.

However, Kingman couldn’t find the same offensive firepower in the second half and had its three-game winning streak come to an end.

Vols senior TJ Cabonavich opened the scoring early in the first half, but Juan Ipina responded for the Bulldogs about two minutes later.

Kingman took its only lead of the contest at the 33:35 mark as freshman Saul Perez Lopez scored for a 2-1 advantage. Lee Williams didn’t let that last for long though, scoring three unanswered for a 4-2 advantage that was cut to one on Anaya’s goal.

At KAHS, the Tigers held on and snapped their two-game losing streak Monday with a 54-52 victory over Parker.

At KAHS, it was another tough loss for the Lady Tigers Monday as they fell 47-37 to Parker.