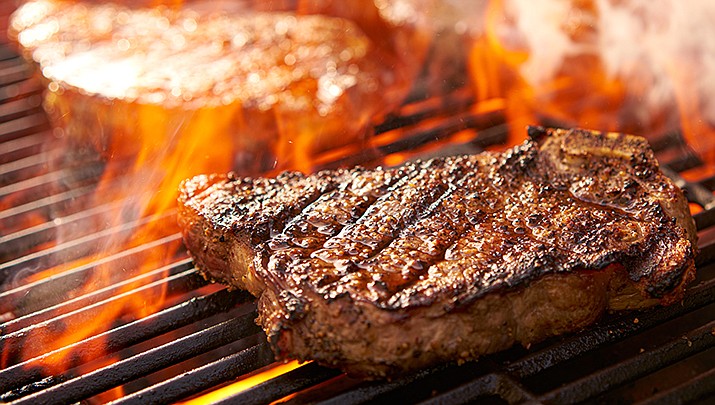 The cost of groceries, and especially beef, is rising dramatically in Arizona, according to a recent price survey by the Arizona Farm Bureau Federation. (Adobe image)

PHOENIX – If you're thinking about grilling a burger or a steak for Super Bowl Sunday, be prepared to dig deeper into your wallet.

The last survey by the Arizona Farm Bureau Federation finds that ground chuck that cost you $3.25 a pound a year ago will now set you back more than a dollar more.

And even that slice of cheese and a couple of strips of bacon will make more of a dent in your finances.

The survey doesn't look at the cost of steak. But it does have a decent stand-in: sirloin tip roast. The current average price found by Farm Bureau shoppers this past quarter was $7.43 a pound. That's nearly 28% higher than a year ago.

And all that is taking a toll on Arizonans. The Farm Bureau figures that the cost of a typical basket of 12 representative items will set shoppers back $56.83. That same basket could be bought a year ago for just $46.22.

It may come down to supply and demand.

Statistics cited by Drovers, a national livestock publication, show that cattle inventory which rose more or less steadily since 2014, now is on the decline as ranchers reduce their herds. And as that happens, expect prices to rise.

The Farm Bureau's Julie Murphree said the effect of the price spike on households is going to depend on how important it is to have red meat on the table -- and how often.

There are alternatives. But they have their own financial implications.

For example, the cost of chicken breasts, as measured by the Farm Bureau, is up by 33% in the past year.

And even eggs, another source of protein, are 52% more costly than a year ago.

But Murphree said there are bargains to be had if people are willing to be careful and shop around.

She suggested paying attention to the food ads in the paper to see which stores are offering what could be considered loss-leaders in meat to bring customers in the door.

Murphree said that most places in Arizona are fortunate to have stiff competition among retailers.

And then there often are even better deals for shoppers who hold a chain's "affinity” card.

(All figures in actual dollars at the time, not adjusted for inflation; Source: Arizona Farm Bureau Federation)