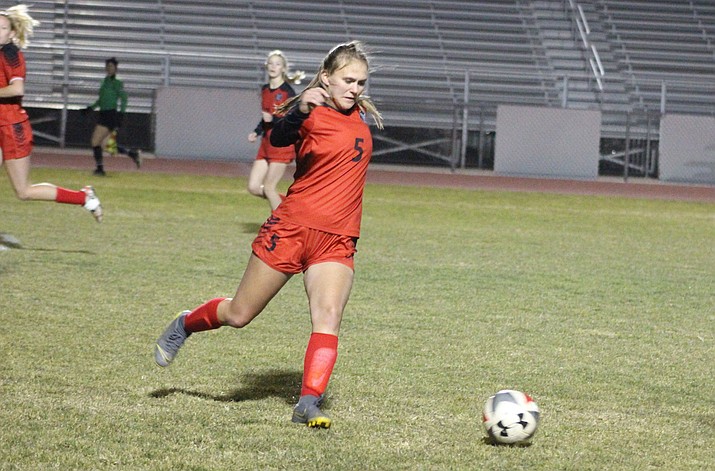 KINGMAN – It was the closest game of the season, but the Lee Williams High School girls soccer team knocked off Lake Havasu 3-2 Tuesday to improve to 7-0 on the season.

The No. 7 ranked Lady Vols now begin the toughest part of their schedule with six straight 4A Grand Canyon Region contests. Four will be against top 10 teams, with the first being a trip to No. 4 ranked Flagstaff (5-1) at 3 p.m. Friday.

At KHS, the Lady Bulldogs couldn’t get on the scoreboard Wednesday in an 8-0 loss to the undefeated Lady Crusaders.

At Lake Havasu, the Vols were shutout in the first half and could only muster one goal Wednesday in an 8-1 setback to the Knights.

At KHS, the Bulldogs dropped their second straight match Wednesday in a 10-0 loss to the Crusaders.

At Wickenburg, the Tigers picked up their second straight win Tuesday in a 60-56 decision over the Wranglers.

Academy used a 21-point second quarter to take a 35-26 halftime advantage. Wickenburg outscored the Tigers in the third quarter, but it wasn’t enough.

At Chino Valley, the Bulldogs rallied from 18 points down Tuesday only to lose a close one to the Cougars 57-55.

Kingman trailed by two with less than 20 seconds left, but missed a pair of opportunities.

“Rider Havatone got a nice little six-foot shot that rimmed out and Jacob Martel got the rebound and was fouled,” said Bulldogs head coach Nick Juby. “He missed both, but they knocked it out of bounds. We got Gabe Imus a great look at the buzzer and it just rimmed out.”

Havatone led Kingman with 26 points, followed by Imus with 15.

At Wickenburg, the Lady Tigers snapped a two-game losing streak Tuesday with a 41-37 win over the Lady Wranglers.

At Chino, it was a valiant effort by the Lady Bulldogs Tuesday as they rallied to within one at halftime, but couldn’t finish the job in a 47-31 setback to the Lady Cougars.

Kingman is back home at 5:30 p.m. Thursday against Kingman Academy.