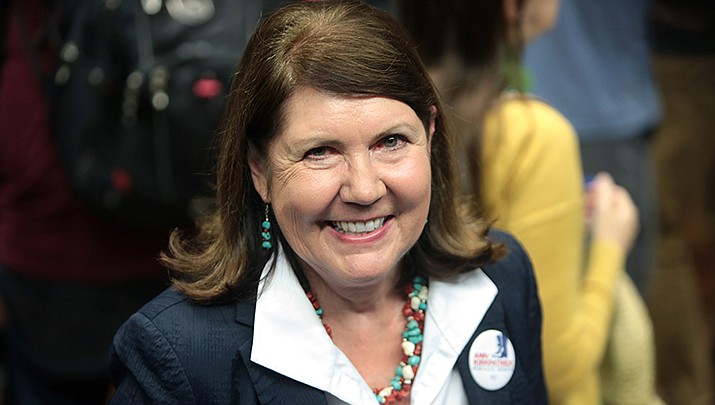 U.S. Rep. Ann Kirkpatrick (D-Ariz.) has announced she is taking an indefinite leave of absence while seeking treatment for alcoholism. (Photo by Gage Skidmore, cc-by-sa-2.0, https://bit.ly/2ss4KXs)

PHOENIX – U.S. Rep. Ann Kirkpatrick of Arizona said Wednesday that she's taking time off from her congressional duties to seek treatment for alcohol dependence after a “serious” fall last week.

Kirkpatrick, a Democrat whose swing district in southern Arizona has been targeted by Republicans in the November election, said she's “finally seeking this help after struggling to do so in the past."

“I am ready to admit that I, like countless other Americans, suffer from this disease,” Kirkpatrick said in a statement. “Hard work and determination – which have brought me success in life – have not been enough to win this battle.”

Kirkpatrick did not release details of her injury last week but described alcohol dependence as “the underlying cause of my fall.” With physical therapy, she said she can fully recover.

Kirkpatrick did not she say how long she would be absent from Congress but indicated she has no plans to step aside, saying she has “the full expectation and desire to return to work stronger and healthier and to continue serving my beloved Arizona.” She said her staff would continue representing constituents and she would publicly disclose her position on all the recorded votes she misses.

She missed a Thursday vote on a resolution asserting that President Donald Trump must seek approval from Congress before engaging in further military action against Iran.

Kirkpatrick, 69, has positioned herself as a moderate in Congress, representing parts of Arizona for most of the past decade, including rural and conservative areas.

She currently represents a swing district in Tucson and southeastern Arizona that Republicans are targeting in the 2020 election. Seven Republicans have filed paperwork to challenge Kirkpatrick in November.

She previously represented a different swing district in northern and eastern Arizona before she ran unsuccessfully against Republican Sen. John McCain in 2016.

McCain's widow, Cindy McCain, who has been open about her own struggles with addiction to prescription pain pills three decades ago, said on Twitter that she's “sending lots of support and friendship to @RepKirkpatrick.”

Before her first run for Congress in 2008, Kirkpatrick was a state lawmaker, prosecutor and attorney.

Rep. Paul Gosar, a Republican who unseated Kirkpatrick in a 2010 House race, tweeted that he's keeping her in his thoughts. Kirkpatrick won the seat back after Gosar switched to a different district for the 2012 election.

“There are many stressors in this business and at every reception and dinner alcohol is provided,” he wrote. “It’s easy — too easy — to become addicted and I wish god speed to my colleague, my friend and my fellow Arizonan. God bless you Ann."

I sincerely thank the many people who have reached out in support after my accident last week. The fall was serious, but with physical therapy I will fully recover. I do, however, have another challenge I must face, which was the underlying cause of my fall. Beginning next week, I will receive treatment that I have struggled to ask for, to treat my alcohol dependence.

I am finally seeking this help after struggling to do so in the past, and I am ready to admit that I, like countless other Americans, suffer from this disease. Hard work and determination — which have brought me success in life — have not been enough to win this battle. Other than being a wife, mother, and grandmother, the most important job in the world to me is representing my fellow Arizonans. I know I must get better in order to do my best in each of these roles.

With humility, I share this news with you. Throughout my time in public service, I have always said that you may not agree with me but you will know where I stand. I will continue to honor that commitment to transparency and communication. So while my immediate focus is on my rehabilitation and treatment, I am taking this important step forward with the full expectation and desire to return to work stronger and healthier and to continue serving my beloved Arizona.

I am grateful to the people of Arizona whom I am privileged to serve, my amazing staff who work tirelessly on your behalf, and my infinitely supportive and loving family.

During my absence, my congressional offices in Washington and Arizona will be fully operational, processing all constituent requests, meetings, activities and correspondence. My positions on all recorded votes will be submitted to the Congressional Record and made publicly available.

From the bottom of my heart, thank you for your support.