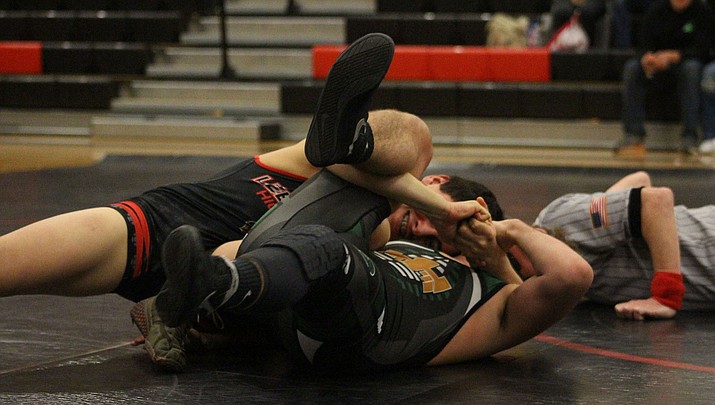 KINGMAN – Christian Marzo isn’t nearly as experienced as his Lee Williams High School wrestling teammates, but that hasn’t stopped him from finding success. Marzo notched a pin in the first period Wednesday to help lead the Vols to a 38-21 dual win over Mohave at LWHS.

“It’s a lot of instincts,” Marzo said. “Everything is a feel for things. I’ve only been wrestling for a month and success just comes from your body awareness. I’ve done MMA and jiu-jitsu, so that definitely helps. But it’s still totally different.”

Marzo isn’t showing any signs of unfamiliarity though, as his win with 48 seconds remaining in the first round at 170 pounds was the second of four straight pins for Lee Williams.

Oscar Gamez (160 pounds) started it off by dispatching his opponent at the 1:13 mark of the first period followed by Marzo and DJ Wyatt (182 pounds) narrowly winning with five seconds remaining in the first. Joe Fisher (220 pounds) completed the pin spree with a fall at the 1:01 mark of the first.

The run helped the Vols turn an 18-14 deficit into a 38-18 advantage, which was also impressive considering they were without one of their top grapplers – Jimmy Wayman.

“Jimmy is the heart of this team, but it shows wrestling isn’t just about one person,” said Lee Williams head coach Dan Ondrejka. “It’s a team effort. Not a lot of people realize that sometimes. Yes, they go out there individually, but as a team they have to come together and really overcome adversity sometimes. They’ve proved that they can today without having our best guy in the lineup. They held their own here at home.” 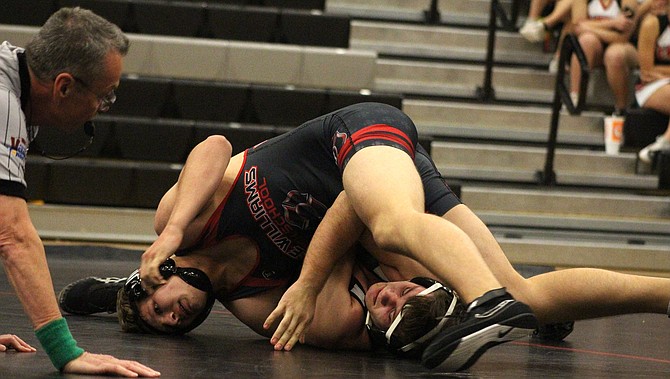 And it couldn’t have come at a better time as the Vols were coming off a difficult trip to Joseph City last weekend.

“It’s really nice to come out of a tough weekend at the Joseph City Invite and have some good practices and win a dual,” said Lee Williams’ Zach Dixon. “That’ll really set the tone for a few other practices we have and that’ll probably carry over into the other tournaments.”

Dixon also picked up a pin at the 1:16 mark of the first period during his match at 126 pounds.

It helped set the tone as John Chandler later picked up a 13-2 victory at 132 pounds, followed by Payton Wayman tallying a 15-2 win at 152 pounds.

Those wins kept the Vols within striking distance before they took control of the match.

“All we ask of these guys is to go out there and fight and they did,” Ondrejka said. “They wanted to win on their home mat and they got it done. We always say, ‘What do we do? We earn it. What do we do? We fight.’ They earned it today and they fought.”

The Vols are back in action Friday at the 57th annual Doc Wright Invitational in Winslow, followed by a trip to the Ironwood Invitational Saturday, Jan. 25.

“This weekend we have a really tough tournament at Doc Wright,” Ondrejka said. “We have the Ironwood Invitational next weekend and then regionals where we’re coming back as regional champs. So we’d obviously like to defend that. Then we have sectionals after that. The next four weeks are huge for these guys.”