We never knew her: Unidentified girl laid to rest in Kingman 3 years after her body was found 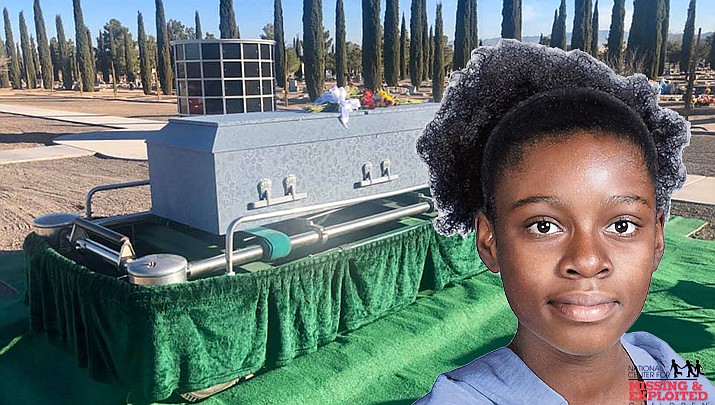 KINGMAN – Despite a battery of tests and an exhaustive investigation, she was buried the same way she was found – without a name.

The body of the teenager discovered in the desert off Highway 93 north of Dolan Springs more than three years ago was finally laid to rest on Thursday, Jan. 16, thanks to Sutton Memorial Funeral Home and Mountain View Cemetery. She was never identified.

“It was just the right thing to do,” said James Sutton of the funeral home, his chin shaking slightly from emotion after the funeral.

He declined to say how much it cost to arrange the funeral services for the body found in the desert in the fall of 2016. The Suttons donated the casket and provided all their services for free, and Mountain View Cemetery provided a grave space and a vault. They are working together on a headstone to be installed within a few months.

“The price doesn’t matter,” Sutton says. “That is not the point.”

He and his sister, funeral director Jamie Sutton-Zorn, were not the only people moved by the story of an unknown girl and a three-year investigation that consumed both the Mohave County Sheriff’s Office and Mohave County Medical Examiner’s Office. She certainly wasn’t unknown to them.

“It’s been two years, please continue to share,” posted the examiner’s office on their Facebook page on Sept. 27, 2018, seeking information about the girl.

“The isotope testing conducted revealed she most likely grew up or spent significant time in the far northeastern section of the U.S. or Canada,” the post continued. “If you are in those areas, please help to spread this post around.”

According to the Sheriff’s report the teen was found in a ravine the evening of Sept. 28, 2016 by hikers. It was determined the body had been there for one to two weeks.

The body was described as an African American or biracial female with black or dark brown hair between 13 and 17 years old. She was between 5 foot 5 inches and five foot seven inches in height, and weighed between 105 and 130 pounds. She had pierced ears, may have had braces at one time, and had no scars or tattoos.

Her identity and cause of death have never been determined and detectives are still actively seeking information that could lead to her identification.

Sutton Memorial Funeral Home took the body, taking its turn in the rotation of funeral homes that assist Mohave County with burials of this type.

James Sutton praised the sheriff’s office and the medical examiner’s office for their work on the case.

“The examiner’s office was extremely diligent trying numerous means to identify her,” Sutton said, praising Dr. Archiaus Mosley and his team. “So with facial recognition, DNA and dental work, it took three years before she could be put to rest.”

Both agencies sent their representatives to the funeral, joining local church and community members.