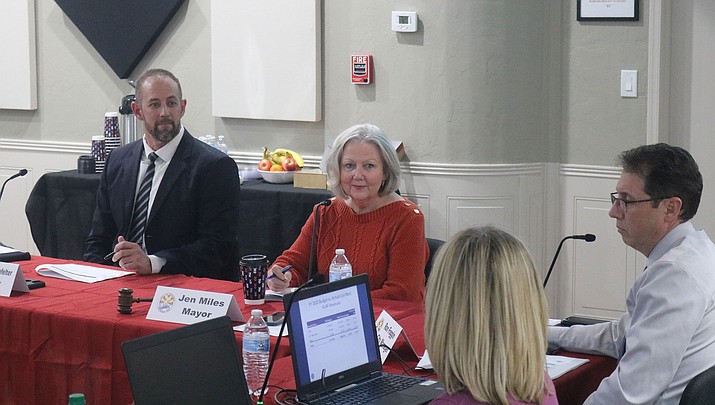 City of Kingman staff members do not recommend taking a property tax measure to voters after receiving data from a recent poll. (Photo by Travis Rains/Kingman Miner)

KINGMAN – While the recent polling of 400 Kingmanites found that residents would be most receptive to a sales tax increase to grow City revenue, the potential implementation of a property tax received enough support to merit discussion.

The poll, conducted over the phone by FirstStrategic Communications & Public Affairs of Phoenix, found that 59% of respondents consider a sales tax increase the most acceptable method of increasing revenue. But that was followed by a property tax, which currently does not exist for the City of Kingman, at just less than 49%. Those figures are a combination of first and second choices for revenue generation.

Respondents were asked what rate they would be comfortable with should a property tax be implemented. Options included property taxes that would cost the “average person” $148 per year, $248 per year or $322 per year.

The poll found that the majority of respondents under the “somewhat more likely” to support category actually favored the latter two options as opposed to the $148-a-year option.

“You end up with a large grouping of people who are like ‘You know, maybe if you’re going to have it, maybe you collect what you need,’” City Manager Ron Foggin said.

However, those falling into the “much less likely” to support category favored the cheaper, $148-a-year route.

When asked how they would vote if a property tax measure was on the ballot, respondents were split.

According to the poll consultant, a property tax could be placed on the ballot for Kingman if at least 60% of respondents said they would support the measure paired with 40% or less against.

“At a dead heat, trying to convince 9.6% of the population (those who responded ‘unsure’) to vote in support of it is too big a hill to climb and the City would not be successful,” Foggin said, adding that staff does not recommend that action at this time.

But Kingman could still look at a strategy to get the wheels turning on the property tax issue. One such strategy recommended by the consultant was to approach voters during the May election and ask for authorization to evaluate a property tax rather than implement one.

Noted pros of going that route included that it would begin the conversation without feeling threatening to some voters and could give Kingman time to build a list of items that need attention. Cons, along those same lines, were that it could delay work on issues that need immediate attention, and could reduce the sense of urgency for needed funds.