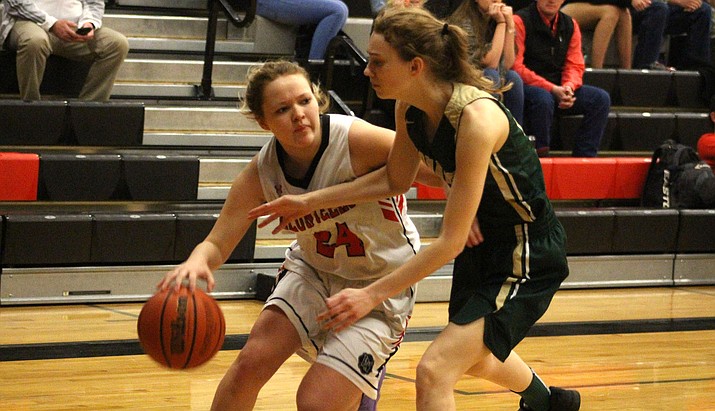 “Well, it was a defensive battle for both teams,” said Lady Vols head coach Jerry Arave. “We only scored like six points each the first quarter, but then both teams kind of loosened up. I think our pressure defense was really, really good, we forced a lot of turnovers and I think that was the difference in the game.”

Lee Williams outscored Mingus 16-9 in the second quarter, 8-5 in the third and 12-8 in the fourth to pick up the victory.

“I think we got our nerves back,” Arave said. “We scored I think six points in the first quarter and we scored 14 in the second so I think we loosened up and Liberty (Cronk) hit a three and it just stretched them a little bit more. And when it stretched them we were able to get some layups and stuff.”

Cronk led all scorers with 15 points, while Lia Lucero added nine and Savannah Jimenez chipped in five for the Lady Vols.

The Lady Vols were 15-for–32 and Cronk almost outscored Mestas from the foul line alone.

“They got too many free throws,” said Mingus head coach Paul Ventura. “We have some, what I would call cheap fouls, a little bit of a hand check here or there and we ended up putting them on the foul line really early and then in the first half that didn’t hurt us very much. In the second half it definitely did, but they made their foul shots.”

“They’re all big for us if we want to make the state tournament,” Arave said on Friday. “This morning we were ranked 30th and so we need to move into the top 24 and so it depends on how the other schools did tonight but we can’t afford to drop any. If we lose to Coconino or Flagstaff that’s not gonna hurt us, but we can’t lose to Mingus, Prescott or Mohave.”