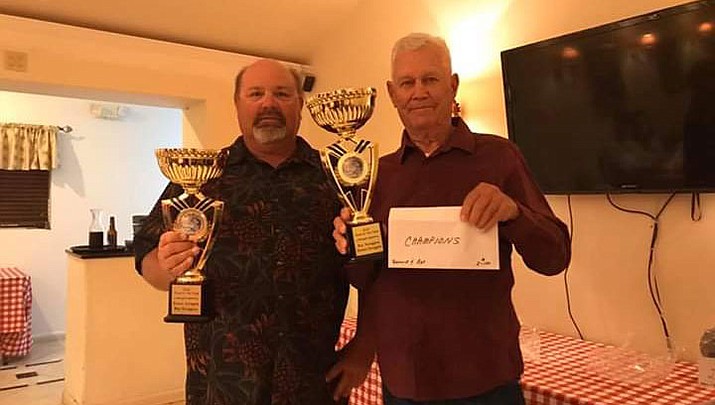 Donnie Scroggins, left, and his father Ray, hold the award they received for being the top team of the Kingman Bass Club in 2019. (Courtesy photo)

The Kingman Bass Club, the area’s only bass fishing club, is ready to start their 2020 tournament trail and they are asking for local anglers to join them this year.

Donnie Scroggins, the club’s president, said he expects a great year of fishing for the teams who join the club this year.

It costs $35 to join. The format is a pick-your-own-partner for a team to fish in the regular tournaments, plus the annual fish-off. Teams must have insurance on the boat they will be using for the monthly tournaments.

The cost to fish a one-day tournament is $110 per team and two-day tournaments cost $120. Teams bring in the best five bass they catch and the combined weight determines the winners. All fish are released, and anglers, even though they can legally keep bass, are penalized if they bring in a dead fish.

Teams fish in the different Colorado River lakes, including Mead, Mohave and Havasu. They also fish at Alamo Lake.

The club’s first tournament of the year will be at Park Moabi on Sunday, Jan. 26. The pre-fish meeting will be held at Kingman Honda on Wednesday, Jan. 22 at 7 p.m.

The club had a recent end-of-the-year awards banquet for 2019.

Donnie and Ray Scroggins received the award for Team of the Year. They also won the big stringer award with a five-fish limit that weighed 23.8 pounds.

Second place went to the team of Chris Morris and Anthony Tatzel. They had the club’s Big Fish of the Year, a lunker that weighed 6.4 pounds.

Dave Hilton and his wife Shannon, along with his father, finished in third place, while Greg Parker and Eric Wolsey rounded out the top four teams.