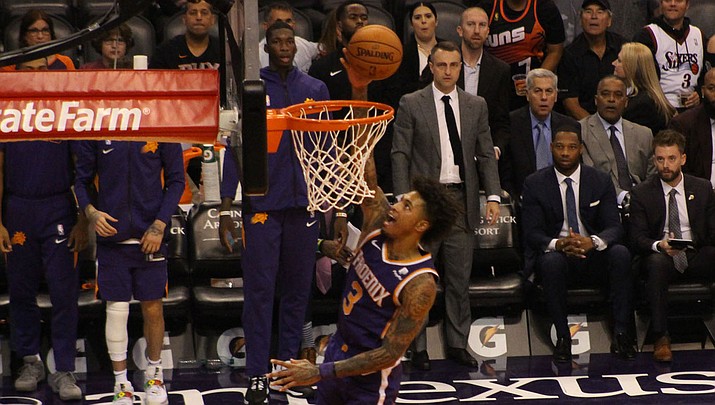 PHOENIX (AP) – T.J. Warren's first game against his former team went about as well as possible. He scored a game-high 25 points, had three steals and played excellent defense against former teammate Devin Booker.

Most importantly, he won.

Warren was the star, Domantas Sabonis added 24 points and the Indiana Pacers rolled to a 112-87 victory over the Suns on Wednesday night.

"There were a lot of emotions but as soon as the ball went into the air it was time to play basketball," Warren said. "That's all I was focused on."

Warren was playing his first game against the Suns after being traded from Phoenix to Indiana during the offseason. The sixth-year forward – who played his first five years with the Suns – shot 11 of 18 from the field.

The 6-foot-8 Warren was one of the Suns' top scorers during his time in the desert, but the franchise struggled through five losing seasons. Things have been much different in Indiana, which looks like a lock for the playoffs with a 29-16 record and has won six of its last seven games.

"It's a lot of fun," Warren said. "Just coming into a family-oriented organization, continuing to build and get better with these guys. Everyone compliments each other, everybody gets along. It's just great to be in an environment like that."

Sabonis added 13 rebounds. The Pacers bounced back from a lopsided loss to Utah 118-88 two days ago and now have a six-game winning streak in the series against the Suns.

"I love the way we responded," Pacers coach Nate McMillan said. "I thought we were solid for 48 minutes."

Phoenix never led and trailed by 25 by midway through the third quarter. The Suns missed their first 11 shots from 3-point range before Elie Okobo hit one late in the third.

Kelly Oubre Jr. led Phoenix with 17 points and nine rebounds. Booker added 16 points. The Suns shot 30 of 84 (36%) from the field and were held under 90 points for just the second time this season.

"Obviously, not a great output tonight of Suns' basketball, the way we want to play, and we've got to figure it out," Suns coach Monty Williams said.

Indiana led 54-48 at halftime. Warren and Sabonis both scored 12 points for the Pacers before the break. Booker scored 14 points for the Suns. They lost both games of a two-game homestand after losing to the Pacers and dropping a 120-118 decision to San Antonio on Monday.

"It's one of those nights in the NBA that didn't go our way," Suns guard Ricky Rubio said. "We didn't play good and we just have to respond."

The Suns shot just 4 of 20 from 3-point range while the Pacers were 9 of 20 from long range. It was just the second game in the NBA this season where both teams attempted 20 or fewer 3-pointers. The only other game was on Jan. 9, when the Cavaliers and Pistons both shot 20 3s according to basketball-reference.com.

Phoenix plays six of its next seven games on the road. That might be a good thing for the Suns: They're 9-10 on the road and just 9-16 at home.