Prep Roundup: Vols keep it close, but fall to Flagstaff 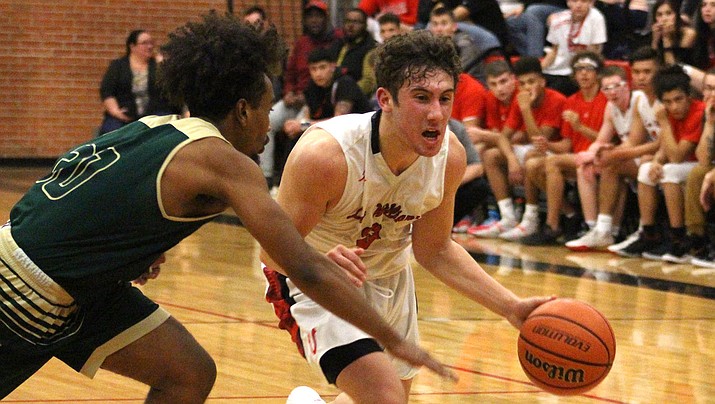 KINGMAN – It’s difficult to go on the road this late in the season, especially in a very competitive 4A Grand Canyon Region. The Lee Williams High School boys basketball team hadn’t let that get in its way until Tuesday, when the Vols suffered a 59-52 setback to Flagstaff.

Lee Williams defeated the Eagles 41-33 at home on Dec. 20, but couldn’t complete the season sweep despite Kade Juelfs scoring a game-high 22 points Tuesday.

No other Vol finished in double figures, as Drew Cardiff, Tony Luna and Marcell Thompson each contributed seven points. Lee Williams trailed by two after the first quarter and saw that deficit increase to 34-27 at the half.

The Vols inched within five at the end of the third, but couldn’t finish the job.

The setback could have hurt Lee Williams’ chances at a second straight region title, but first place Coconino suffered its first region loss of the season Tuesday in a 44-43 decision at Bradshaw Mountain.

At St. John Paul, the Bulldogs snapped a two-game losing streak Tuesday with a convincing 73-25 victory over the Lions.

Kingman jumped out to a 54-4 halftime advantage and never looked back. Rider Havatone led the Bulldogs with 23 points, while Darius Quasula added 14 and Jason Reitz had 13. Jacob Martel rounded out the top performers with 11.

At Flagstaff, the Lady Vols couldn’t keep their two-game winning streak alive Tuesday in a 67-43 loss to sixth-ranked Flagstaff.

"We gave up too many offensive rebounds and (Miyah Verse) made us pay," said Lee Williams head coach Jerry Arave. "We stopped her in the second half, but then (Emma Doskicz) torched us for 12 points in the second half. Our defense was solid and we forced some bad shots. We just didn't get the rebounds."

Verse led all scorers with 22 points, while Doskicz added 15 for the Lady Eagles. Savannah Jimenez led Lee Williams with 15 points, followed by Hayle Davis with eight and Amya Sellars with seven.

At St. John Paul, the Lady Bulldogs couldn’t get much going Tuesday in a 78-15 setback to the Lady Lions.