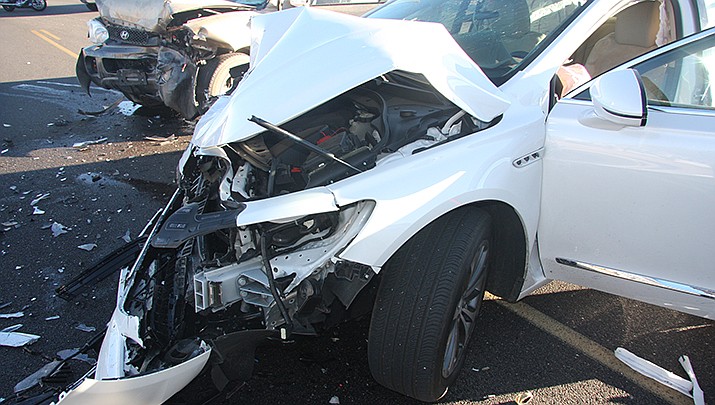 The 69-year-old male driver and an 80-year-old female passenger in the white sedan shown above have died from injuries suffered in the Jan. 7 crash on Stockton Hill Road in Kingman. (Kingman Police Department photo)

KINGMAN – A man and woman involved in a Jan. 7 crash on Stockton Hill Road have died of their injuries, according to the Kingman Police Department.

Robert Fred Naumann, Jr., 69, and Joan P. Walsh Naumann, 80, both of Kingman, died in a Las Vegas hospital from injuries sustained in the head-on collision.

Police said in a news release that a 19-year-old Kingman woman was driving south in the 1000 block of Stockton Hill Road at about 9 a.m. when her Hyundai Santa Fe crossed the center line and struck the couple, who were traveling northbound in a Buick four-door sedan, head-on.

The 69-year-old male driver of the Buick and the 80-year-old female passenger were flown to Sunrise Medical Center in Las Vegas with “severe, life-threatening injuries,” the news release said.

Investigators determined that the 19-year-old driver of the Hyundai, who reportedly suffered a broken arm, fell asleep at the wheel and failed to negotiate a curve.

Speed was not a factor in the crash, according to KPD. However, the type of crash -- head-on -- is a factor in the investigation, which is ongoing. Police have said charges may be pending.