A day no dogs would die: Mohave County Animal Shelter goes above and beyond to save lives 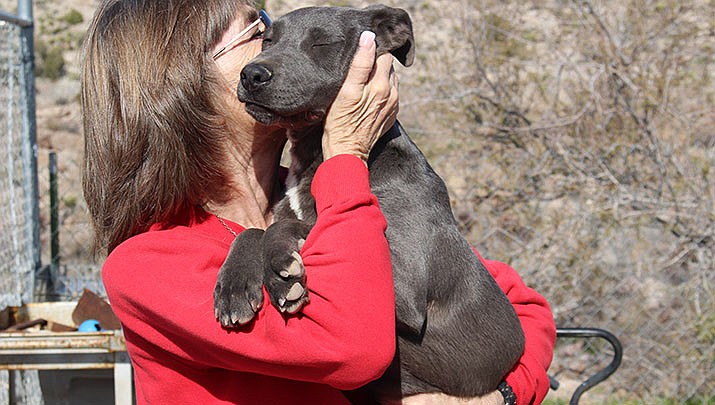 Ingrid, a silver Labrador puppy available for adoption, is shown with Cherie DaLynn, who founded the For the Luv of Paws no-kill shelter 15 years ago. (Photo by Agata Popeda/Kingman Miner) 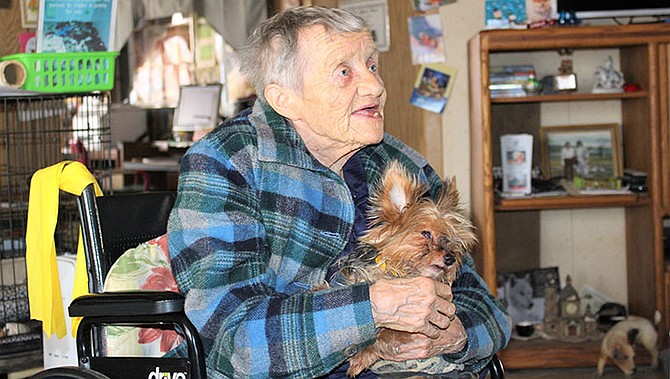 The immediate Kingman area has four animal shelters. The main one at 950 Buchanan St. – the Mohave County Animal Shelter – fulfills the requirement that each county operate a facility so that dogs and cats are not running wild.

“The whole thing to remember is that we are the only open-intake shelter within 13,000 square miles,” said Nicole Mangiameli, who took over management of the shelter more than a year ago. “For example, Bullhead City takes dogs only from their city. The small shelters you are talking about take whatever they can handle. We have to take all county dogs and cats.”

While not claiming a “no-kill” status, the county shelter does whatever it can to avoid putting down animals due to space constraints, reserving euthanasia only for very aggressive or very ill animals.

Cherie DaLynn of For the Luv of Paws, a no-kill rescue located 20 miles from Kingman on the way to Oatman, confirms Mangiameli really turned the county shelter around since she took over managements in September 2018.

“When Western Arizona Humane Society ran the place, their kill rate was abhorrent,” DaLynn said. “It was 30-40% higher than now. And they used to do adoption events once a year. Now, the shelter does them every week and they transfer the animals they cannot keep.”

About 25 out of more than 250 animals received in December 2019 were euthanized, 12 of them brought in by animal control, which usually delivers animals that have been given up by their owners due to being very aggressive.

“We have a no-kill ethic,” Mangiameli said. “We save almost everything. We adopt out animals with no eyes and legs. But we cannot release to the public a dangerous dog we are not able to rehabilitate.”

However, for Lotti Benker, who runs Help Animals Lives Today 10 miles north of Kingman, this is not enough. She calls the county shelter a “pound.”

“We are absolutely a no-kill shelter,” Benker said. “So much that we don’t even kill mice here. We set traps and set them free so they can go someplace else.”

Benker never gives up. She says no dog should ever be left chained outside, and no cat should ever be declawed because that changes their personality.

But DaLynn of For the Luv of Paws says she had to learn that she can’t save all animals. She started 15 years ago with a permit to have 15 animals. Now she is permitted 180 and sometimes goes a few above.

“But private rescues always have a right to refuse,” she explained. “If we get full, we don’t take anymore, but the county shelter has to remain open” and accept all animals.

The reality is the county shelter and the local no-kill rescues work closely together. The shelter calls the rescues when they have dogs and cats they cannot keep. Mangiameli credited the rescues, as well as the Friends of the Mohave County Shelter, a nonprofit support group, for helping to save the lives of so many animals.

Mohave County Animal Shelter will soon get a new, bigger building that will hold twice as many animals. They currently average 150 to 200 animals on any given day, but it varies by season.

The new shelter is being built with $2 million designated by the county, and will be located on N. Burbank Street in Kingman.

“I would like to see that,” Benker said, still skeptical. “The only reason they are doing something is that we were bugging them for years and collected 5,000 signatures.”

Mangiameli promises also to start uploading to the county’s website animal shelter statistics and a quarterly accounting of what they do with the animals brought to the facility.

As for now, DaLynn said, the county shelter “might not be the best-looking place, but it is clean and they take care of the animals.”

“October was crazy,” Mangiameli said. “We got 440 animals. It was insane. And we made darn sure we saved almost all of them.”