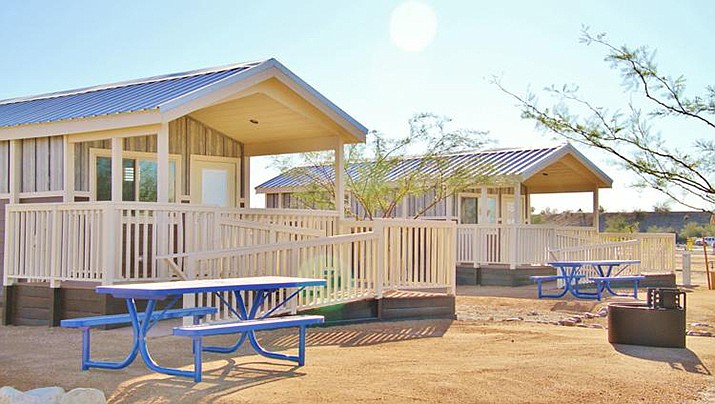 About two months after their grand opening, a row of 13 new cabin facilities have seen growing popularity in Lake Havasu State Park. State Parks officials are working with GoLakeHavasu to further promote the facilities through a “Valentine Cabin Giveaway” sweepstakes announced earlier this week.

According to State Parks Public Information Officer Michelle Thompson, the sweepstakes is a chance for both agencies to promote the new cabins, which have already caught the interest of outdoors enthusiasts throughout Arizona. Thompson says Lake Havasu State Park’s new cabins have seen an average of 12 people per week for cabin stays, and 215 nights have been reserved for the cabins through the end of 2020.

“Our cabins are popular for people who are hoping for a less rustic camping experience,” Thompson said. “At Lake Havasu, we have received positive comments about the experiences and about the location of the cabins, but we need to spread the word to more visitors.”

Winners will receive a two-night cabin stay for as many as six people, as well as two weekend passes to Havasu’s annual Rockabilly Reunion event starting Feb. 14.

The winners will also receive dinner and beer tasting for two at Mudshark Brewery, as well as other prizes from Arizona State Parks and Trails.

The sweepstakes is free, and readers can enter at azstateparks.com/win-a-valentine-cabin-getaway.