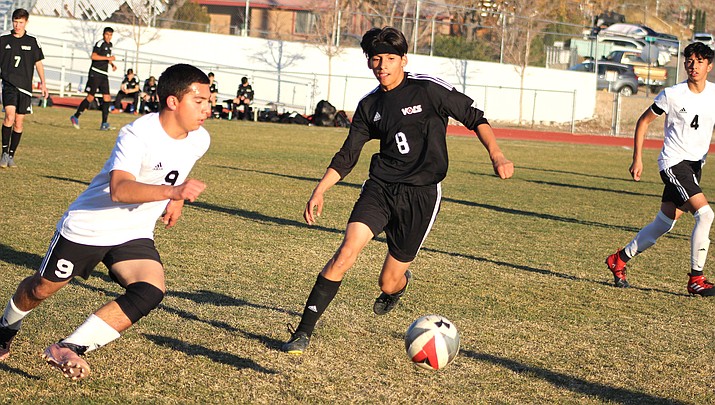 KINGMAN – As the old saying goes, "defense wins championships," but a squad still needs the offense to contribute in order to tally victories.

The Lee Williams High School boys soccer team has struggled scoring goals recently and that was once again the issue Wednesday in a 3-0 loss to Coconino at LWHS.

“We’ve used the excuse of missing people and having injuries, (but) as far as I’m concerned it’s not a crutch that we should be bearing,” said Vols head coach Mike Bertelsbeck. “It’s frustrating to know we’re playing well and having the opportunities, but we need to capitalize on them. The scoreboard tells a different story in the last (few) games. Until we can figure out how to put it in the back of the net, these are the results we’re going to get.”

And the results haven’t been pretty, as Lee Williams was shut out for the first time all season and watched its losing streak reach three matches.

But it wasn’t for lack of trying.

The Vols had a number of opportunities to score in both halves, but couldn’t convert. Adding insult to injury was Coconino jumping out to a 1-0 advantage in the opening minutes.

“I can’t take anything from their effort,” Bertelsbeck said. “(But) one of the things we talked about last year and this year is we get down and the first place our heads go is down. We have to find that resiliency to pick our heads up, fight and be scrappy.”

It appeared Lee Williams would respond following the early goal, but it never materialized as the Panthers pushed their lead to 2-0 with 8:22 remaining in the first half.

The second half was a back-and-forth defensive battle until Coconino tallied its third goal of the match with 7:53 on the clock.

“I feel if we score first, then it’s a different ball game,” Bertelsbeck said. “That confidence is something that we’re lacking. A lot of it comes from inexperience. A lot of these guys haven’t played varsity, but there are a handful that have.”

“I think we’re all reeling and searching for answers,” Bertelsbeck said. “It’s just been a trying season all around. We have four region games left and hopefully we can have a good showing, clean up and see where we land.”