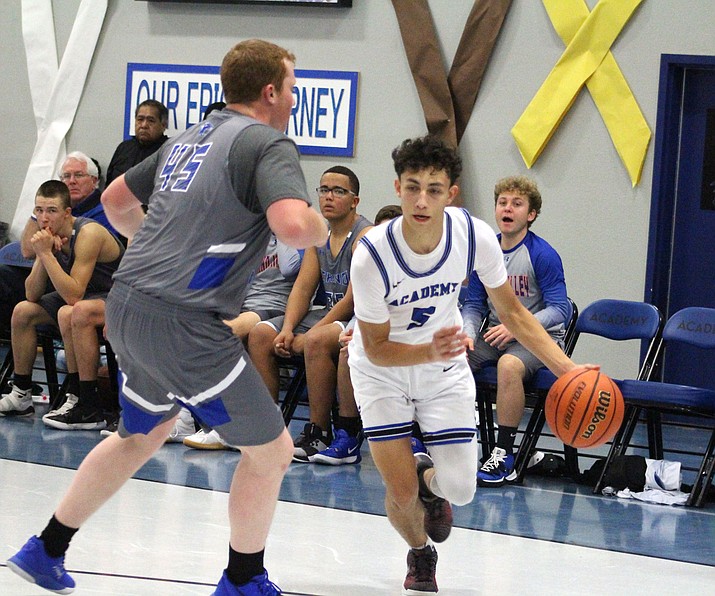 Trevin Zach led the Tigers with 17 points Thursday in a 67-42 setback to Chino Valley. (Photo by Beau Bearden/Kingman Miner)

KINGMAN – Not many squads find a way to rally from a 10-point deficit, especially in the second half. The Kingman Academy High School boys basketball team almost proved otherwise, but couldn’t complete the comeback Thursday in a 67-42 loss to Chino Valley at Betty Rowe Gymnasium.

“Chino is a great team. They’re extremely well-coached and they’ve been playing basketball together forever,” said Tigers head coach William McDavid. “So we knew they were going to come out on a run. And we’re confident in ourselves enough to where if they do, we can come back. We did in that fourth quarter until about halfway through.”

Academy trailed by just three points at halftime and tied it in the opening minute of the third quarter, only to have Chino Valley find a spark and take a 40-30 advantage at the 4:11 mark.

The deficit didn’t stop the Tigers though.

They kept battling and trailed by six points at the end of the third on Trevin Zach’s buzzer-beating 3-pointer. Academy then used a 6-0 run to inch within 46-42 with 6:21 remaining, but couldn’t get any closer.

And a big reason for that was Chino Valley finishing 22-of-30 at the charity stripe, including a 12-for-14 mark in the fourth quarter. 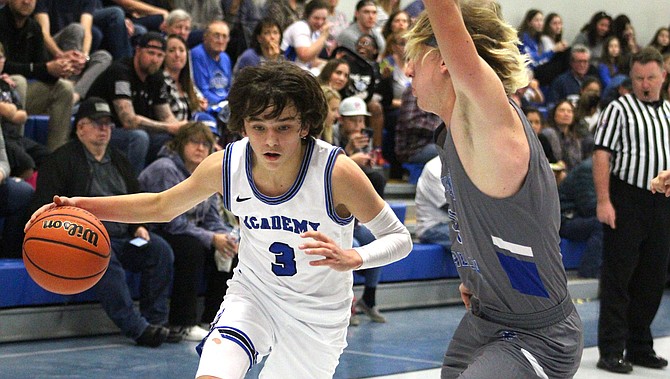 “Chino is a great foul-shooting team. They only missed eight out of 30 – that’s outstanding for a high school program,” McDavid said. “I’m OK with it sometimes. I would rather our guys get into some foul trouble because we didn’t have anyone foul out, outside of Wyatt (Hall) getting close. We have enough horses in the barn that we can send out. If anything, it sends a little bit of a message – you don’t go easy in our paint.”

The Tigers, meanwhile, finished 12-of-17 at the free-throw line, with four of those misses coming in the fourth quarter.

Academy did outscore Chino Valley in bench points, as Trevin Zach notched 17 points to lead the Tigers, followed by Connor Alleman with 13 and Logan Stephenson with 10.

However, Alleman was kept in check for most of the second half as the senior tallied just five points.

“Chino keyed in on Connor,” McDavid said. “Everyone has film on Mr. Alleman. He can play like a Hoss and when they key in on him, we just kick it out. He does a wonderful job of being unselfish. He doesn’t feel like he needs to score 15 points a night. If we win, he’s happy. And that’s what we need out of him.”

“We have (three teams) in the top 25 right now, with River Valley just barely sitting out,” McDavid said. “I guarantee they’re going to get in with as well as they’re playing. So we could have (four) in the top 25. I feel confident that this is a top-tier region and we’ll probably get four teams into the playoffs. I feel comfortable being second, third or fourth in that.”