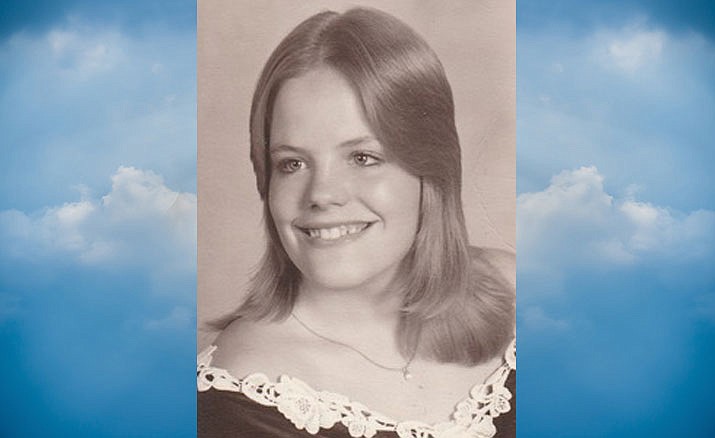 Jeanne Diane Esquibel (Blanton) was called home on Dec. 17 in Peoria, Arizona with her daughter, Misha, close by her side.

Jeanne Diane Esquibel (Blanton) was born May 21, 1958 in Lancaster, California to Patricia Ann Blanton and was later adopted by Thomas K Blanton. Jeanne lived with her brothers, sister and parents in several places, from Prescott, Boulder City, and finally to Kingman where she spent the majority of her life. Jeanne attended Manzanita elementary school and graduated from Kingman High School in 1976 and had many friends, some of which she remained in contact with for many years; Lucretia Wilson-Fast and Cheryl Reader-Benton. Jeanne worked at several places, from Yellow Front to Holiday Inn and Video USA. She especially enjoyed working at Video USA as she would always bring home a new movie to watch, as long as it was a horror show of some type. She loved her late night binge watching of horror movies and re-runs of Mash, and Charmed. She was an avid reader and could finish a romance novel or Stephen King book in no time at all! Jeanne was a very caring person who always loved and cared for her family and friends, in the good times and the not so good times. Jeanne was blessed with three children whom she raised with Mark Esquibel, her former husband.

She was preceded in death by her Mom and Dad, Patty & Tom Blanton; Nan-naw, Irene Hager; her namesake, Aunt Jeanne, Nelda Jean Decker; and a close friend of many years, Sherry Taras.

Jeanne is survived by her children, Misha (Shane) Whalen and Derek Esquibel, both of Kingman; stepson, Joseph (Chelsea) Dronchi of Chandler, Arizona; and granddaughter Kailee Phillips; along with siblings Lisa Blanton and Mike Blanton, both of Kingman, and Mark (Jen) Blanton of Florida; nieces and nephews, Mike Alsman of Texas, Lindsey (Drew) Sutherland, Teri Belger of Arizona and Ashley (Dequaan) Simmons of Chicago.

She was a one-of-a-kind person and will be greatly missed. We take solace in the fact that she is no longer in any pain or suffering and is with her mother, whom she missed immensely. A Celebration of Life will be held at a later date.