Prep Soccer: Lady Vols bounce back with victory over Bradshaw Mountain, improve to 8-1 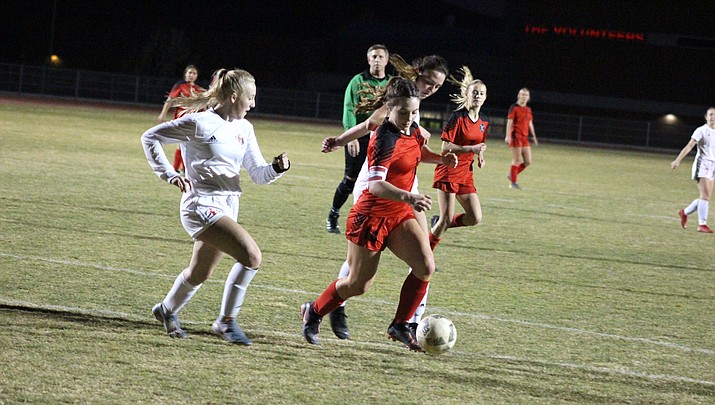 Lee Williams sophomore Mackenzie Cathey speeds past a pair of defenders. Cathey tallied two goals Friday as the Lady Vols shut out Bradshaw Mountain 2-0 for their eighth win of the season. (Photo by Beau Bearden/Kingman Miner)

KINGMAN – A squad faces a number of tests during a season, but one of the toughest is recovering from the first loss of the season.

Sometimes that one setback can spell doom for the rest of the journey, but the Lee Williams High School girls soccer team made sure that didn’t happen Friday by picking up a 2-0 win over Bradshaw Mountain at LWHS.

“It’s a great team victory,” said Lady Vols head coach Chris Selby. “This was a super important game. It was a must-win game and they went out and did the job. I’m super proud of them. I couldn’t ask for a better team.”

However, it was far from an easy win as Lee Williams battled from the very first whistle.

The Lady Vols were shorthanded and had to turn to third-string goalkeeper Jocelyn Graffi, but the senior captain held her own with the help of a strong defensive performance in front of her.

That strong effort allowed Lee Williams to control the intensity on the other side of the pitch and sophomore Mackenzie Cathey capitalized on her opportunities.

Cathey opened the scoring at the 23:12 mark of the first half and added an insurance goal less than five minutes later for a 2-0 lead the Lady Vols never surrendered.

“Our goal was to set the tone of the game by scoring first,” Selby said. “And we did. We came out and we scored pretty close to the beginning. Mackenzie’s second goal had a lot to do with her speed. But I would say setting the tone was the most important part because we got the momentum. And we kept that momentum and didn’t let them score.” 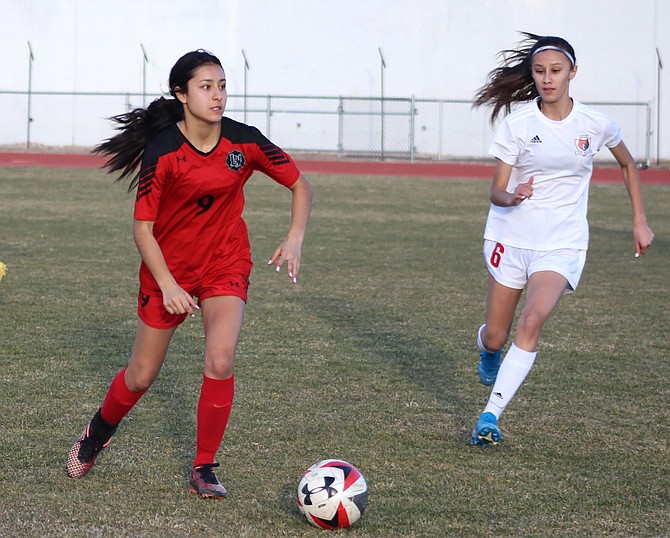 Lee Williams spent most of the second half on the Lady Bears’ side of the field, but could never find the back of the net. The Lady Vols did keep Bradshaw Mountain on its heels and it could never find enough momentum to get on the scoreboard.

However, the win comes at a cost as Cathey received a red card late in the second half and will miss the next match.

“It hurts us huge,” Selby said. “I would love to have my best team out there against them, but it’s not going to happen.”