Suspects toss drug-filled suitcases onto I-40 near Kingman 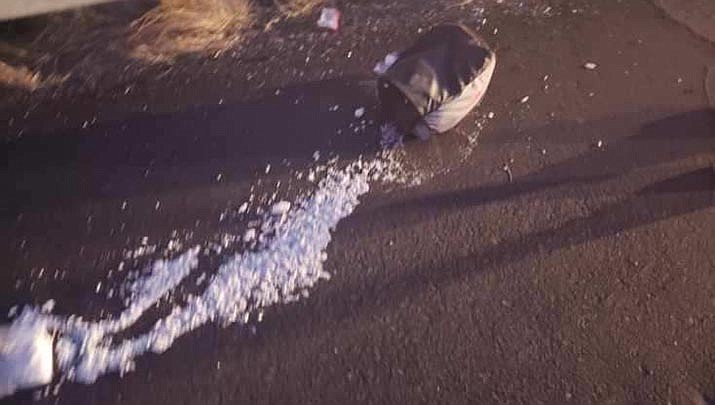 This is some of the suspected methamphetamine that spilled onto Interstate 40 after suitcases filled with suspected drugs were thrown from a vehicle during a traffic stop near Kingman on the evening of Thursday, Jan. 23. (MCSO photo)

Suspected methamphetamine and counterfeit oxycodone pills with a street value of $2.1 million were recovered after suspects threw suitcases out of a car during a traffic stop near Kingman.

The incident occurred at about 6 p.m. Thursday, Jan. 23 at mile post 65 on Interstate 40, and resulted in the arrest of two California men and a 17-year-old male juvenile.

The sheriff’s office said deputies were conducting a traffic stop on a black sedan traveling east on I-40 when the occupants threw suitcases out of the passenger side of the vehicle.

One of the bags broke open, causing a cloud of white powder to be strewn across the highway.

The sheriff’s office reports the vehicle came to a stop near MP 65, the occupants were detained and the area where the bags were thrown was secured.

Approximately 20.4 pounds of suspected methamphetamine that was strewn across the highway was recovered, along with a 1.2 pound bundle of counterfeit OXYCODONE pills believed to be laced with fentanyl.

A second suitcase containing another 25.4 pounds of suspected methamphetamine was also recovered.

Detectives with the Mohave Area General Narcotics Enforcement team took over the investigation, and were assisted by K-9 Sevende and his handler from the Kingman Police Department.

The Pinion Pine Fire District responded to decontaminate and remove any existing residue on the interstate.