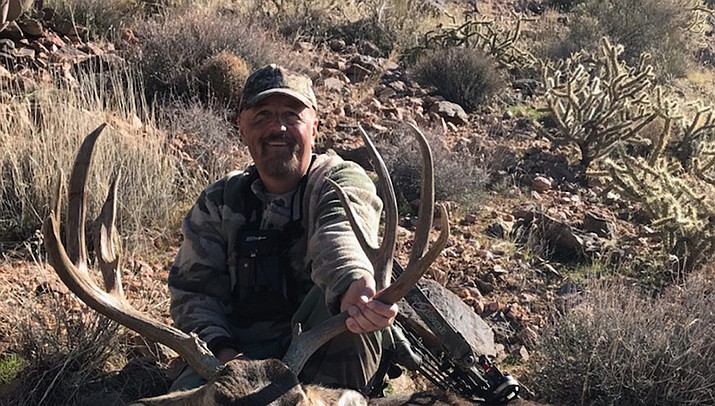 John Beauchamp of Kingman poses with the massive mule deer he shot in the desert. (Courtesy photo)

Over the years that I’ve been writing for the Miner, I’ve documented a lot of local sportsman who have been successful in their hunting pursuits.

One hunter who enjoys the pursuit of desert mule deer is John Beauchamp, and I’ve been fortunate to pen stories about his hunting exploits where he has taken deer, elk and javelina with his bow and arrows. He even took a huge desert bighorn ram in the Black Mountains, and a big buck in Unit 12B on a rifle hunt.

When an archer takes one or even two animals with a bow and arrow, he may have just been lucky.

However, when he or she consistently score with every species they draw a tag for, then there is more to the story.

This year Beauchamp had the good fortune to bag a mule deer; and this one was special. It is the second largest mule deer he’s ever taken and was the result of a lot of patience and perseverance.

Beauchamp is a selective hunter. What that means is he is at a point in his hunting career where he doesn’t just take the first animal he has an opportunity for. He passes on bucks that maybe others would be glad to take.

Beauchamp said he hadn’t taken a buck with his bow since 2012, but it wasn’t for the lack trying or of opportunity. “I’ve seen some really good bucks during that time,” he said.

Last year Beauchamp, like many Kingman residents, had bought an over-the-counter deer tag. He hunted all three of the seasons and had a couple of experiences stalking big bucks, but for one reason or another, it just didn’t work out.

John looks for older bucks in all the units around Kingman. He’s hunted the Music Mountains, the Peacocks and Unit 18A. Unit 18A is his favorite. “I like the challenge of hunting big bucks in the desert,” he explained.

Last December Beauchamp said he pursued a wily old 3x3 buck in Unit 18A that sported a rack he thought was at least 28 inches wide. “I thought I was going to get him, but in the end, I lost him. He was a smart old buck,” Beauchamp recalled.

Knowing that there were some good bucks in Unit 18A, when the season opened for archers on Jan. 1, he was back there.

Beauchamp met Josh, who hails from California, many years ago and they have hunted together. In the end Josh would get both a deer and javelina. During the hunt, Beauchamp would meet Justin, a friend of Josh.

The three hunted together for a couple of days when Lady Luck shined on the Kingman sportsman.

Beauchamp had glassed up two bucks over a mile away. One of the bucks was what John had been looking for. It was a desert monarch, tired from the rut that had just ended.

With Josh and Justin watching and even filming the bedded bucks, Beauchamp headed out on a stalk.

Like every veteran hunter knows, he had to figure out the wind and a way to make a stalk that would get him into archery range. That stalk took a lot of time and patience as Beauchamp would find the bucks bedded on a very steep face of a mountain where they could see, hear and smell any danger.

Working his way from the top of the mountain Beauchamp found himself with a small window of opportunity when the buck stood up at a range of 68 yards.

Beauchamp never hesitated as he settled the sight on the buck and squeezed the release.

“I saw the fletching of the arrow and it hit him solid,” Beauchamp said. The buck dropped in its tracks and rolled down the mountain.

Beauchamp had the desert monarch he’d been looking for.

Beauchamp said he was extremely glad that he had friends there watching and ready to assist. “They walked in and helped me pack out all the meat,” he said.

The buck Beauchamp took was a 5x4 with a spread of about 27 inches. He also had an abnormality of sorts. Mule deer rarely if ever have teeth on the upper jaw. But this buck had a single canine tooth in his upper jaw. It is the first time that John had ever seen that on a buck.

Beauchamp also had an archery javelina tag in his pocket on his hunt and was able to get within a few yards of a group of pigs. He decided he would just sit and watch them as he glassed for deer.