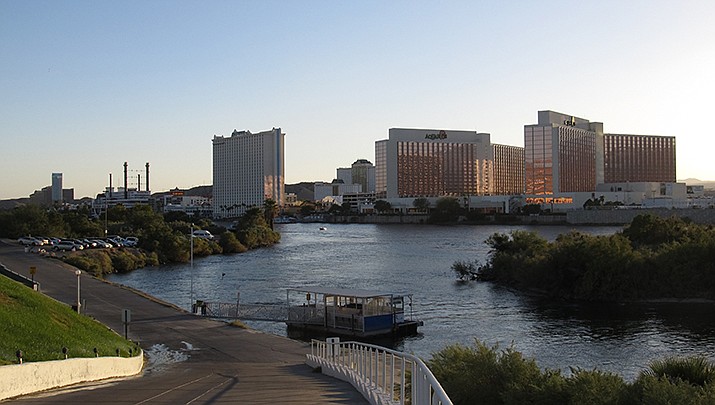 Several hotels and casinos in Laughlin have closed again after employees contracted COVID-19. Laughlin is shown above from the Bullhead City side of the Colorado River. (Photo by Ken Lund, cc-by-sa-2.0, https://bit.ly/2NVWk1L)

LAUGHLIN, Nev. - Some hotels and casinos in Laughlin. Nevada, have closed again after employees tested positive for COVID-19, officials said.

The Avi Resort & Casino has closed its doors until July 10 after several of its employees tested positive, KTNV-TV reported. As a result of the suspension, the July 4 fireworks show will be canceled, the casino said.

Caesars Entertainment has said visitors are not able to book a room until July 26 since the property is anticipating reaching its self-imposed occupancy maximum to limit the spread of COVID-19. However, guests can continue to check for availability in the event there are cancellations, company officials said.

The Colorado Belle announced in May that it would not reopen, laying off 400 workers. Golden Entertainment Inc. said at the time that the closure was an attempt to stop the spread of the virus.

The company also said it would not disclose health information about team members at The Aquarius.

“Those who test positive will not return to work until they have twice tested negative for COVID-19,” the statement said.

Statewide, officials have reported more than 20,000 people tested positive for COVID-19 and 528 have died.

For most people, the coronavirus causes mild or moderate symptoms, such as fever and cough that clear up in two to three weeks. But for some – especially older adults and people with existing health problems – it can cause more severe illness, including pneumonia and death.