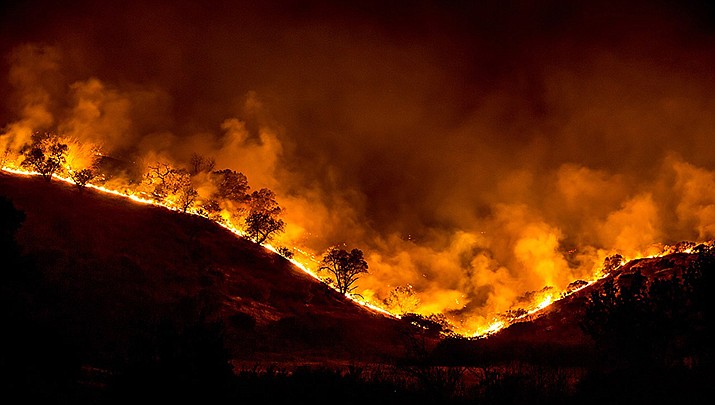 A red flag fire warning has been issued for the Kingman area for Tuesday, July 7 and Wednesday, July 8 due to dry conditions, low humidity and high winds. (U.S. Forest Service photo/Public domain)

KINGMAN – The National Weather Service has issued a red flag warning as well as a fire weather watch for the Kingman area for Tuesday, July 7 and Wednesday, July 8, respectively.

Tuesday is expected to have a high temperature of around 101 degrees, paired with winds increasing to 15 to 20 mph in the afternoon. However, winds could gust as high as 36 mph. Those gusts will fall to 26 mph overnight, with a low of 71 degrees.

According to NWS, the red flag warning issued for Tuesday means that critical fire weather conditions are either occurring now, or will occur shortly. Strong winds, low relative humidity and warm temperatures can contribute to “extreme fire behavior,” the weather service wrote on its website.

Conditions Wednesday will be similar to Tuesday’s weather. The high temperature is forecast at near 99 degrees and winds could gust as high as 32 mph. Winds aren’t expected come nightfall, however, which will have a low of around 70 degrees.

As of Monday, July 6, high winds and wind gusts were expected to cease after Wednesday. However, temperatures near and surpassing 100 degrees will remain through Sunday, July 12, which has a forecast high of 106 degrees.