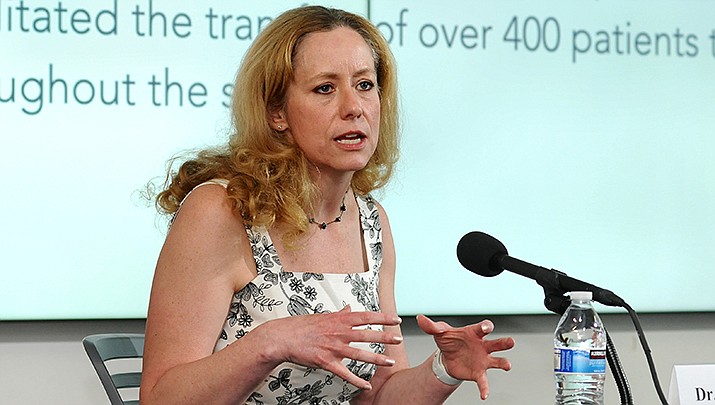 PHOENIX – The number of confirmed coronavirus cases in Arizona has now surpassed 100,000, and younger people, not the elderly, make up more than half of them, state health officials said Monday.

The Department of Health Services said more than 62,000 of the 101,441 reported cases involve people younger than 44.

Department Director Dr. Cara Christ said it's people between 20 and 44 who can drive community spread of COVID-19. Younger people have a much lower risk of serious illness from the virus, although some do get very sick or die.

“That’s the biggest concern, is that they’re not at risk, they’re out in public potentially getting exposed,” Christ said. “They're also more likely to be asymtomatic or only have mild symptoms, and then potentially could bring it home to an individual who’s at high risk for complications.”

Two weeks ago, Republican Gov. Doug Ducey allowed cities and counties to require face masks to help prevent the spread of the virus. The majority of the state's population now is under a mask order. Last week, Ducey ordered bars, gyms and movie theaters to close for three weeks in Arizona, which leads the U.S. in new virus cases per capita. The action has drawn criticism from Republicans and defiance from one metro Phoenix chain of health clubs.

But Christ said those nightclubs, bars and gyms are where transmission is more likely. And she pushed back at a gym chain that has sued to challenge the closure order, saying telvision news video showed Mountainside Fitness was not taking needed steps to prevent transmission.

“They’re not requiring masks, they’re not requiring physical distancing, we don’t witness them spraying down the machines afterward,” Christ said. “And we know that when you exercise you’re inhaling and exhaling more forcefully, which increases the transmissibility of the virus.”

Lawyers for Mountainside, which operates 18 gyms in metro Phoenix, were in court Monday and argued that no COVID-19 cases have been traced to an Arizona gym. They also said the state has no rational basis for shutting down gyms that were following the state’s protection guidelines, while letting restaurants and hair salons remain open.

The governor’s attorneys said the order is sound because there’s an increased likelihood of being infected with COVID-19 through respiratory droplets when people exercise vigorously indoors.

A judge said he plans to rule Tuesday on the request to throw out Ducey’s order to shut down.

Totals released Monday by state health officials include an additional 3,352 confirmed cases and one new death. However, they said the figures may be an undercount because of a lag in reporting from hospitals over the weekend. The number of reported COVID-19 deaths stands at 1,810.

Arizona remains high in terms of positive tests and coronavirus hospitalizations. While the test positivity rate nationwide is around 9%, Arizona's total is around 13.4%, and last week was above 23%. The number of hospitalized COVID-19 patients on Sunday was 3,212, a new high, according to state data. Hospital capacity statewide is currently around 89%.

Arizona has seen cases double in the past two weeks, a huge rise that Christ hopes will begin to slow in a week or two as the impact of mask and closure orders is felt.

Ducey reopened the state on May 15 after a six-week stay-home order and other closures, and cases started climbing about two weeks later, after crowds started re-appearing at bars and nightclubs and more people started circulating.

Christ said younger people especially didn't think they could be affected, and went out.

The mask and bar closure orders are aimed at them in particular, she said.

"We did a really great job messaging to our vulnerable populations, our elderly, our long-term care facilities and out congregate settings about the risks," she said. “And I don’t know that our younger population associated the risk of COVID 19 with them.”

Worldwide, the number of infections is thought to be far higher than reported numbers because many people haven’t been tested and studies suggest people can be infected without feeling sick.

The coronavirus causes mild or moderate symptoms such as fever and cough for most people. But for some – especially older adults and people with existing health problems – it can cause more severe illness, including pneumonia, and death.