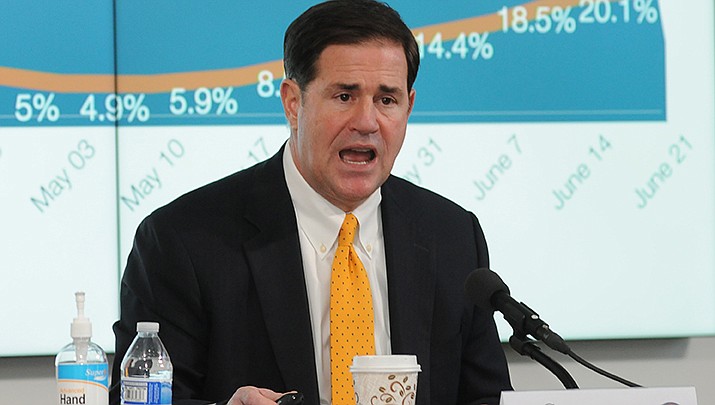 A health club chain has lost its legal battle against an executive order by Arizona Gov. Doug Ducey, shown above, forcing gyms and some other businesses to temporarily close due to a surge in coronavirus cases. (File photo by Howard Fischer/For the Miner)

PHOENIX – A judge has rejected a request by an Arizona health club chain to stop enforcement of Gov. Doug Ducey’s shutdown of gyms, leading the fitness business to temporarily close its doors after disobeying the governor's order for a week as Arizona experienced a sharp increase in coronavirus cases.

Mountainside Fitness shut down the 18 health clubs it operates in metro Phoenix on Tuesday afternoon after a judge ruled that the coronavirus provided a rational basis for the governor to take such emergency action.

A week ago, Ducey ordered the closure of gyms, bars, water parks and tubing business for 30 days. The order is scheduled to expire on July 27, though the governor has the option of extending it further.

Mountainside argued the state had no rational basis for shutting down gyms that were following its protection guidelines, while other businesses that did a poor job at social distancing were allowed to remain open.

The governor’s attorneys said gym closures are legally sound because there’s an increased likelihood of being infected with COVID-19 through respiratory droplets when people exercise vigorously indoors.

Judge Timothy Thomason wrote that Mountainside acted responsibly in taking precautions to protect its employees and club members from the virus, yet it still faced a hardship as a result of two closures forced by the pandemic.

Even so, the judge said elected officials must be given wide latitude in making decisions in emergency situations. “The public has a very strong interest in dealing with public health concerns like this one. The hardships could become even more immense if the spread of the virus is not curtailed,” Thomason wrote.

Mountainside Fitness chief executive Tom Hatten, who has 1,500 employees and more than 100,000 club members, expressed disappointment in the ruling. Hatten said his business has lost millions of dollars from closures prompted by the pandemic.

"We will still be continuing our fight for Mountainside Fitness and other businesses across Arizona as we hope to prevail in the coming days when we go to court,” he said.

State regulators also suspended liquor licenses at cafes and bistros at two health clubs operated by Life Time, which disobeyed the order for three days before closing and isn’t a party to the lawsuit.

Mountainside was joined in the lawsuit by EoS Fitness, which operates 22 clubs in metro Phoenix and has remained closed since the governor’s order took effect.

In other developments: – A second state legislator has tested positive for COVID-19. Health officials also reported new highs Tuesday in hospitalizations and ventilator use.

“Unfortunately, it seems I am the last of my team to catch the chaotic COVID-19. I found out late today that I tested positive," Osborne wrote on Facebook.

State Sen. Lupe Contreras, D-Avondale, in April became the first state legislator to test positive. Contreras recovered and later attended proceedings at the state Capitol in May and has urged people to take the virus seriously.